Catching Fireflies at the Star, ﻿and Other Matters

During a recent Sunday message, I talked about a young poet, Jacquelyn Suskin, who believes that there is a poet/artist inside all of us. (To listen to this message, click here)

Jacquelyn’s book, Every Day is a Poem, details how we can get in touch with this internal poet/artist. When we do this, we come more into direct contact with the Divine Spark inside us that is our real essence. We in Unity call it the Christ within, but it has been called by many different names down through the ages.

The poetry that flows from connecting with our internal poet/artist might not look like a formal written poem. It may be a real change in our consciousness. 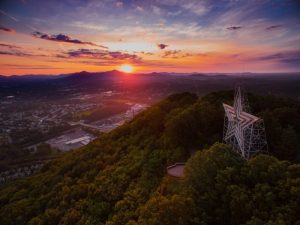 But how do you get in touch with this poet/artist? Well, Jacquelyn suggests that we do several things. First, she suggests we do an awe check. Have we lost that sense of awe in our lives, and how can we rekindle it if we have? I talked about being north of Duluth, Minnesota, and asking an entrepreneur from that part of the world if they got the four seasons up there. He responded by saying, “No, we only get two seasons up here – winter and construction.” I suggested that if you are only getting “winter and construction” in your life, it is time to increase the quantity and quality of awe you are experiencing.

I have found that a good way of doing this is remembering what it is like being a child. I think most of us have a great deal of awe inside of us as children until it gets beaten/drilled/drummed out of us. I had a recent experience that really boosted my awe quotient.

My six-year-old daughter, Therese, 17-year-old daughter, Rachel, and I recently returned to Mill Mountain in Roanoke to visit the Star. It was a beautiful warm summer night, and the sun was setting behind the mountains in the west. Lights were coming on in the valley below. We walked out to the observation deck and really enjoyed the view. 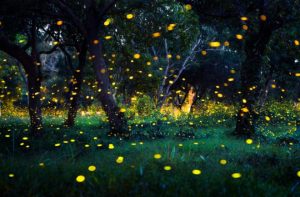 But then Therese said to me, “Come on Daddy, let’s go and look at the fireflies. We walked down a path toward a darkened part of the mountain woods. “You know, where I lived when I was growing up, we called them lightning bugs,” I told Therese.

We rounded a turn, and there they were: hundreds, perhaps thousands of fireflies in the sky.

All of us were in such awe. Therese caught a few of them in her hand. Their lights went on and off. Then she let them fly away.

Finally, we walked back to the observation deck, and I heard a man say to his young son, “I have been all over the world. You’ll be hard-pressed to find something more beautiful than this area.” I felt such awe and gratitude for my new home. It is easy to take many things for granted. I love the saying, “You can’t fail to be in Heaven. You can only fail to recognize it.”

But I have also recently come across several other examples where children and childlike awe have rekindled a key Ingredient needed to find that internal poet/artist. For example, Katie Brown, the mother of several young daughters, comes from Petoskey, Michigan. The town is right on Lake Michigan. In fact, as you drive around Petoskey, you will always have this big body of water on one side of your car.

So one day, Katie had to run many errands. She piled her girls into the car and felt more like “winter and construction” than in awe of the wonders of her neck of the woods. All of a sudden, one of Katie’s daughters asked, “Mom, who poured it?”

Katie felt like responding, “Who poured what?” But then she got the question: Who poured that incredible Lake Michigan? Right there in the car, she felt overwhelmed with awe and gratitude for the lake – and her many blessings. She said to her daughter, “God did, darling.” She also said that she “silently gave thanks for the reminder to slow down and take in the wonders all around me – from the Great Lake to my growing girls.” 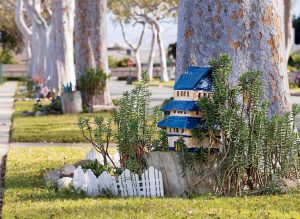 Let me give one more example of that awe and gratitude. Susan Minegar Luna lives in Santa Ana, California. She found it very difficult meeting the 39 different families on her street. It can be that way these days. We don’t really know our neighbors. Susan noticed that her grandchildren liked building fairy gardens and houses. So Susan got the idea to build a fairy garden and house outside her house, near the street.

Not only was it beautiful and magical, but it was a big hit with many of the people living on her street. Neighbors came up to her and asked Susan about fairy gardens and houses. This led to a growing number of friendships. Eventually, Susan felt Spirit saying to her: “Build a fairy garden and house for all 39 of your neighbors. Make certain every fairy house and garden represents something unique about each of your neighbors.” Susan really tapped into her internal poet/artist. One fairy garden and house was a small football field and stadium, while another was a fairy fiesta.

One last example: In the 1960s, Walt Disney hired Robert and Richard Sherman to create the songs for the movie Mary Poppins. Walt was trying to convince Julie Andrews to play the quirky English nanny, so he invited Andrew’s to come to the studio to hear the Sherman brother’s songs. 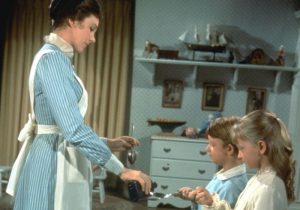 That night, a sad Richard Sherman asked his son how school went. His son said that he got a polio vaccination in school. Richard wanted to know if it hurt. His son said, “No. It was a liquid, and they put it on a sugar cube.”

Well, Richard had a real moment of awe and a solution to his problem. From this discussion with his son came the hit song “A spoon full of sugar helps the medicine go down.”

The Star and fireflies, Lake Michigan, fairy houses and gardens, and Mary Poppins: Don’t live in just “winter and construction.” Make certain you are in touch with that awe and your internal poet/artist. Children do it all the time, and so can you!