Eric Carle and ﻿Those Magic Moments

Unless you are a parent with young children or a grandparent with the same, the name Eric Carle might not mean anything to you.

But if you have had to joy of reading The Very Hungry Caterpillar to a child, then you probably know about the book’s author (Eric Carle) and that he recently made his transition at age 91.

In one sense, Eric’s books involve uncomplicated stories. In the case of the caterpillar, we are dealing with a caterpillar who eats through one apple, two pears, three plums, four strawberries, five oranges, one piece of chocolate cake, one ice cream cone, one pickle, one slice of Swiss cheese, one slice of salami, one lollipop, one piece of cherry pie, one sausage, one cupcake, and one slice of watermelon. This little fellow gets a stomach ache and decides to stick to tree leaves. Nevertheless, the hungry caterpillar turns into a beautiful butterfly. 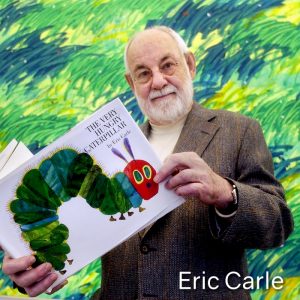 What is missing in the above retelling of the story is the bright and joyful color palette that Eric used. Also missing are the descriptions of the creative page designs that Eric mastered. For example, children can actually stick their fingers through the holes in the foods where that very hungry caterpillar has eaten through. Meanwhile, the various pages are often different shapes and sizes.

The Very Hungry Caterpillar has sold more than 55 million copies around the globe, and the book’s 224 words have been translated into more than 70 languages. In his career, he wrote more than 70 books that sold over 170 million copies. In addition, Eric won many awards for his innovations and excellence in children’s literature.

One of my favorite Eric Carle books is Papa, Please Get the Moon for Me. In this book, a little girl longingly looks at the moon and asks her father to bring it down for her. So the father gets a very big ladder to bring the moon down for his daughter. When the father hands his daughter the moon, it is only a thin crescent. She is overcome with joy to play with the moon in her yard. Eventually, the moon gets so small that it disappears. Then, a few days later, the moon is once again way up in the sky and growing in size. 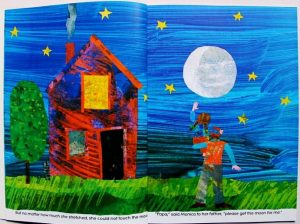 The colors used by Eric are incredible, and the shapes of the various pages are unique and help develop the story. For instance, children love unfolding the page where the father climbs and climbs the very tall ladder all the way up to the moon.

Eric said that his love of colors and nature sprung from his walks in the woods with his father when he was a small boy. When he became an adult and needed to earn a living, Eric became a commercial artist for Madison Avenue. His bright and creative use of colors and shapes were really welcomed by several of our country’s leading advertising firms.

As his successful career was unfolding, the author and publisher of a book entitled Brown Bear, Brown Bear, What Do You See? asked if Eric would be the illustrator of this children’s book. Eric said, “Yes,” and the rest is history. 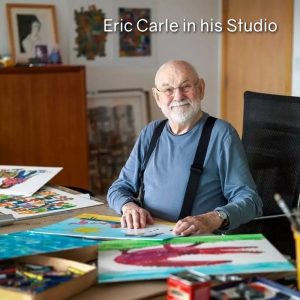 I wish I could have met Eric Carle, but I never had the opportunity. However, I had the next best thing – the Eric Carle Museum in Amherst, Massachusetts. I would strongly suggest that if you are ever in central Massachusetts, please stop by and visit this museum. The building itself is bright and modern, and it is located in the beautiful countryside. Large windows seem to maximize the natural light that pours into this museum dedicated to all picture books – not just Eric Carle’s work. When Eric and his wife were visiting Japan, they toured a museum dedicated to picture books. That experience gave the Carles the idea to build a fantastic museum in America that would also showcase picture books.

I loved the permanent and temporary displays and exhibits at the museum. My children and I have also enjoyed the art studio in the museum where children (and adults) are encouraged to paint and draw their own illustrations, or whatever else they fancy. There are sculptures of several of Eric’s characters and creations. My youngest daughter, Therese, loved being near – and a part of – the sculptures. There is a wonderful collection of picture books in the museum, and on several occasions, the Belous family had storytime right there. 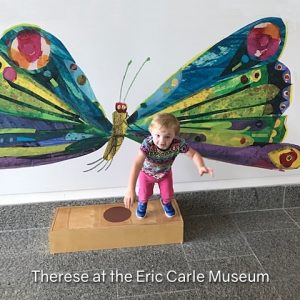 But perhaps my favorite part of the entire museum is the museum’s auditorium. On many days, the museum shows an excellent film that explores the life of Eric Carle. What moved me the most were the parts of the film where we have a chance to go into his studio and watch the master create a beautiful illustration. We see how he builds up a rainbow pallet of beautiful colors. In the film, Eric explains how he gets lost and absorbed in his projects. He says that time seems to disappear when he is doing this. Also, he says that he is not thinking about his troubles and the crisis du jour. He feels a real connection with his art, and things just seem to flow. He says that when he is in this spiritual state, he does not even care if the picture and/or illustration is sold or liked by the critics. It is more important to feel and experience that moment of self-actualization.

I believe that we can – and should – have these moments in our lives. We may not be great artists like Eric Carle. But we all have talents and the ability to experience pure activities. What do I mean by pure activities? We can do these things, not for the love of money, fame, or other recognition by society, but because we love doing them, and they bring us closer to Spirit. To quote The Beach Boys, these pure activities are also “fun, fun, fun until daddy takes the T-bird away.”

Please ask yourself: “What pure activities are there in my life?” “Am I giving enough time and attention to these pure activities?” “Am I thanking God for my talents?” And lastly: “Do I really believe that I can accomplish mighty things?

I am grateful for people like Eric Carle, who shows us what is possible – and have fun in the process.