I release my worries to Spirit and know that all is in Divine Order.

My wife had recently died of cancer, and I was now the single parent of two daughters (one thirteen and another just two years old). I was only half a year into being the minister at my first church. On top of that, I was many miles away from relatives and friends.

I was filled with grief, fear, and worries. There was intense grief over the loss of my wife, who was not only my lover but also my best friend. There were real fears that I would fail to meet my daughters’ needs as a single parent. I also had many worries about meeting my new congregation’s reasonable expectations. 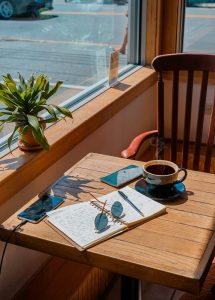 There were times when these worries became so intense and unbearable that I felt like a drowning person after the ship had sunk to the bottom of the ocean. At first, I did not see any way out of this quagmire.

One day as I was driving and feeling this intense wave of worries, I saw a coffee shop. I pulled over, parked, and went inside. There was an empty table. I put my bookbag down on it and got a mug of decaffeinated java. Taking out a notebook and pen, I started writing a prayer letter to God. I told Spirit about my intense grief and pain over my wife’s death. I poured out my fears and worries about being a single parent. Next, I wrote about my anxieties about being a good minister for my new church. On top of that, I mentioned my financial concerns and worries I had about my health. I also expressed the intense loneliness that I felt being so far away from family and friends.

But then, something deep inside of me suggested that I start listing my blessings and the things I was grateful for. This list was long. Then that “still, small voice” suggested that I write down a few affirmations that mean so much to me. I wrote:

“I can do all things through Christ who strengthens me.” (Philippians 4:13);

“There is only one presence and one power in the universe and in our lives: God the good, omnipotent.” (Unity’s first basic principle)

All of this came alive for me, and I started feeling good. No, not just good but great! I said to myself, “Are they putting something in the coffee these days?” Then I remembered that I had ordered a decaf.

In the coming months after that experience, there were times when the fears and worries would start creeping back. Each time I would literally go back to that same coffee shop, order more java (decaf), and write another prayer letter to Spirit. This “medicine“ kept on working, and it still does to this day.

The song, I’m Gonna Sit Right Down and Write Myself a Letter, was first released in 1935. Fats Waller really popularized the song. The song was also featured in the Broadway musical Ain’t Misbehavin. Frank Sinatra, Bing Crosby, and Count Basie all recorded covers of it. But I think my favorite version is the one done by Nat King Cole. Bill Haley & His Comets even recorded a rock and roll version of the song.

I think about I’m Gonna Sit Right Down and Write Myself A Letter every time I reach for my notebook to write a prayer letter to God. As the song says: