In The Heights: Who Could Ask for More?

Rachel, my 17-year-old daughter, and I are huge Lin-Manuel Miranda fans!

So it shouldn’t come as a big surprise that we just loved his new movie, In The Heights. Our advice is to run – don’t walk – to see it either in local movie theaters or streaming on HBO MAX. We saw it at The Grandin Theatre, and we also fell in love with the place. We have lived in Roanoke for over a year, but because of the pandemic, we are just now beginning to explore the fantastic places of Roanoke! In Tulsa, the wonderful arts movie theater is called “Circle Cinema.” On leaving The Grandin Theatre, Rachel leaned over to me and said, “This place is like the Circle.” She couldn’t have paid The Grandin a higher compliment. 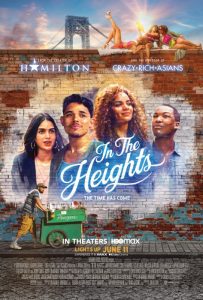 I believe In The Heights is a deeply spiritual movie about our modern society. Of course, you might say that a minister would even see a phone book – if they still existed – and declare that reading it is a deeply spiritual experience. Be that as it may, I would gladly go to a show or musical film written by Lin-Manuel Miranda, even if it was about a phone book. (You know, I think he has the talent to turn a story about a phone book into a Tony and Academy Award project.)

Miranda became famous for creating the Broadway show Hamilton, which is about America’s first Secretary of the Treasury. It would be easier to tell you about the few awards Hamilton did not win than to list all of the awards that Hamilton did win. Miranda also recently starred in the Disney movie Mary Poppins Returns.

The release of In The Heights was delayed because of the pandemic. It was filmed in New York City, and you will see many wonderful parts of NYC that out-of-towners don’t often visit. Of course, the “heights” in this movie is Washington Heights, which is a section on Manhattan’s upper west side near the George Washington Bridge (which goes over the Hudson River to New Jersey). 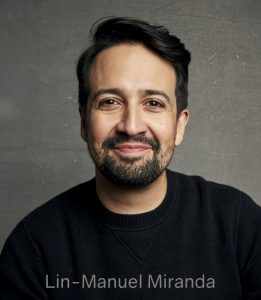 When Henry Kissinger‘s family escaped Nazi Europe, they came to America and lived in Washington Heights. Now Washington Heights is the home for many Latinos living in NYC. Through excellent music, choreography, and cinematography, the movie captures the flavor of this thriving community.

The central character, Usnavi de la Vega, is an immigrant from the Dominican Republic who now owns a small bodega. Through the many customers and employees of the bodega, we learn about this community. We meet the salon ladies who know all the latest news, gossip, and beauty trends. We meet small-time vandals, graffiti artists, and the owner of a little cab company. We meet the shaved ice pushcart man and many others. We also meet Abuela Claudia, who is the entire neighborhood’s unofficial grandmother.

Miranda skillfully shows us through songs and stories that all of these Washington Heights residents have dreams – many of them very big dreams. But then, in every case, these wonderful dreams run into some challenging realities. For example, a young woman who has a real talent for fashion design runs into racial and ethnic discrimination blocking her path. A young man, who is a “Dreamer” and has spent almost all of his life in the United States, can’t get into college because he is an undocumented alien. Even the graffiti artist who is incredibly talented can’t develop his career.

Elderly Abuela Claudia faces what seems to be the toughest roadblock of all – the Angel of Death. This scene was filmed in a subway station, subway car, and tunnel, and I have never seen a near-death experience filmed and depicted better. 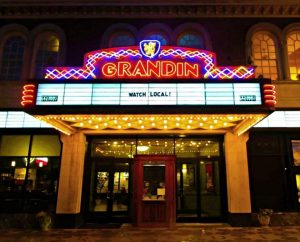 The spiritual glory of this film is how the characters face these difficult roadblocks of their dreams. These roadblocks crush some, and it is sad. But others find a divine spark inside of themselves that helps them grow through the challenges and overcome the obstacles.

I don’t want to spoil the plot for you. But let me tell you some more about one of the sub-stories in the film. Nina is a smart and beautiful young woman who arrives home from her first year as an undergraduate at Stanford University. Nina is seen as the shining example of somebody who will break out of the barrio and be a senior executive at some Fortune 500 corporation. However, Nina wants to drop out of Stanford. Her education is costing her father an arm-and-a-leg that he can’t afford. Also, Nina has faced some very unpleasant situations at Stanford with no support from the university or other students.

But through her experiences back in Washington Heights and seeing what is happening to others in her community, Nina develops a strong passion for becoming a lawyer to help Dreamers and others. She will return to Stanford with a new determination to overcome and not take guff from anybody – even the university!

This is a key point in so many of the sub-plots. We may start with individual dreams, but these dreams will often face very tall obstacles. The way to climb these obstacles is not just an individual effort. Yes, it often takes a village working together to get over these walls. In the process, what started as an individual dream often takes on a community aspect of love and service. 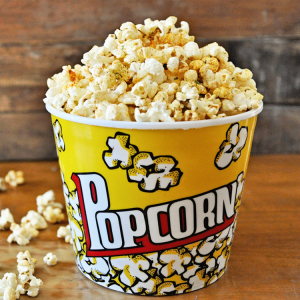 I promise you that Miranda gets all of this across in a heartfelt way that is not didactic! Even engaging animation and special effects are employed. One scene shot in an outdoor New York City public pool has water ballet shots that rival the great Busby Berkeley films of the 1930s.

My six-year-old daughter, Therese, was with us watching In The Heights. Therese speaks very favorably of The Grandin Theatre’s popcorn, candy, and soda. Also, we saw the film on a rainy night, and we were able to get a parking space right in front of the theater. I mean, who could ask for more?