One of the first things you notice about Unity Village, the worldwide headquarters of the Unity movement, is the beautiful gardens.

Located outside Kansas City in Lee’s Summit, Missouri, Unity Village is truly a spiritual oasis. The buildings look like something out of the Italian renaissance. There are incredible rose gardens, nature trails, two lakes, fields, streams, sculptures, and fountains that can take your breath away.

When I went to Unity Institute and Seminary, Debbie, Rachel, Therese, our cat (Sphinx), and I lived in a lovely house on an acre of wooded land in Unity Village. We felt very blessed to be surrounded by such natural and human-made beauty.

If you have never been to Unity Village, I hope you will visit those sacred acres for a class, workshop, or even a drive/walk/pray-through. The first time I visited Unity Village, I headed up research for United Way. We had just conducted focus groups in Kansas City, and I remained in that “everything is up to date in Kansas City” for one more day. 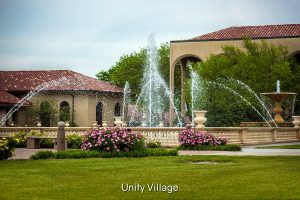 I drove the rental car out to Unity Village and went on the tour. It was a feeling like coming home. The beauty and peace struck me. I felt relaxed and at ease. As part of the tour, I remember watching a film narrated by the late James Dillet Freeman, whom many consider the poet laureate of the Unity movement. During the film, I started to cry in that darkened auditorium.

As beautiful as Unity Village is, I was blown away when I saw Unity of Roanoke Valley. Unity Village is larger than our campus, but URV and our 26 sacred acres are right up there with Unity Village in terms of gardens, fountains, natural trails, labyrinth, and more. In fact, in certain areas, I think we are ahead. 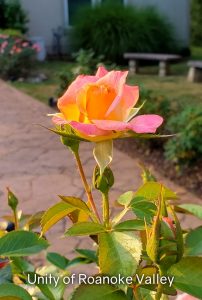 Many hands, feet, and hearts have made keeping up URV into a labor of love. I would like to “shout out” special thanks and praise to three individuals for all that they have done:

Our Building and Grounds Volunteer extraordinaire, Bill Sapp; and,

Being in nature at URV restores the soul. Walking the nature trails and reading under the trees can center one beyond words. I have also enjoyed walking the labyrinth, listening to the water flowing through the fountains, birds chirping, and more before work hours.

I have also learned some powerful lessons from URV’s gardens, and I would like to share some of these life lessons with you. They include:

Being down does not mean you are down for the count: It was several weeks into spring, and one tree by the patio in the rose garden looked dead. I was so sad that this tree might have to be cut down. Even without any leaves on it, the branches were beautiful. I would have loved to paint this seemingly dead tree and its twisted branches if I were an artist. 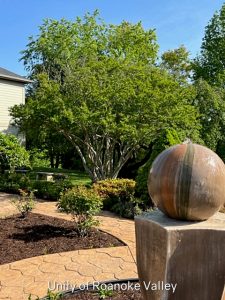 I asked Greg about this “dead” tree. He told me that the tree was very much alive, and in a few weeks, it would be full of new life and green leaves. Well, as the picture demonstrates, Greg was right! This reminds me that the age of miracles is not past, and resurrection – or what Charles Fillmore often called regeneration – is still going on right before our eyes. We have the ability – and are called – to be a part of this process.

In the dead of winter, Jesus led his disciples through a barren field and said, “The fields are ripe (some translations say ‘white’) and ready for harvest.” That great Unity teacher Eric Butterworth said our first job was not to set things right. “Our first job is to see things right,” he insisted. How often are we ready to write things off as dead when that thing would be willing to be resurrected if we gave it half a chance – and have faith? And that includes ourselves!

Buddha was right: I saw resurrection in one tree in the Unity of Roanoke Valley garden, but Buddha was right: In the material world, nothing lasts forever. In the “relative realm,” as Metaphysicians call it, we exist in a world of change and impermanence. The only constant is change. 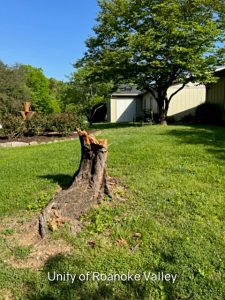 Many of you will remember the beautiful tree next to the fountain out front of the main URV building. Flowers often circle the fountain, and this lovely tree shaded them.

A few weeks ago, powerful winds were blowing through or mountains. We heard a large crash! Then Greg looked, and this tree had fallen over. It was no longer standing tall. We were sad to see that this had happened.

We were grateful that Bill Sapp came up with his chain saw that night and cut away the branches in the dark. Greg gave him the best light he could. This picture shows all that remains of the once beautiful tree. Yes, Buddha was right about impermanence. But we can know joy and peace even in the midst of this change. 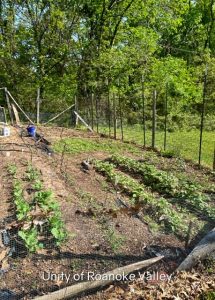 However, as URV became interested in Neighbor Helping Neighbor, Celia McCormick envisioned reviving the vegetable garden. Celia imagined the vegetables being grown for people in need. Her dream of providing fresh vegetables for people caught on. A small army of gardeners is now turning this dream into a reality!

The old church model is called the minister-centered paradigm, in which ideas and directives tend to flow from the top down. URV, like many other Unity churches, is moving into a community-centered model where ideas and initiatives tend to “bubble up.“ It does take a village to create the “beloved community“ that so many of us long for.

There was a robbery recently at URV‘s garage near the labyrinth. The thief, or thieves, hightailed it down the hill in their car. Their car swerved and hit one of the columns by the bridge before it wound up in the creek. The stone column was knocked down – as well as the light – and most of the stones wound up in the creek. 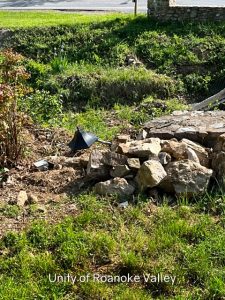 The thief, or thieves, ran away, leaving their car and most of the stolen items. They also left fingerprints and DNA evidence. The police believe they know who committed the robbery.

Bill Sapp had wanted to do some work on the bridge, but he didn’t know how he would divert the water to perform the job. When the thief knocked down the column, the stones landed in the creek so that they diverted the water. Bill is now able to do the work!

Also, hopefully, this incident will lead to long-term good for the thief or thieves. Court orders have led many people into recovery through Alcoholics Anonymous and Narcotics Anonymous.

In the Disney movie Alice In Wonderland, there is a song about “Learning a lot from the flowers.” There is a lot we can learn from URV’s gardens, flowers, and trees. Click here to watch this charming song from the Disney classic movie.

We are entering the growing season. May it be a wonderful spring and summer for all of us with much growth.