Mazes vs. Labyrinths: A Metaphor For Our Lives

I have had interesting experiences with both mazes and labyrinths, and I think that they really represent two divergent paradigms that I have followed during different periods of my life.

A maze, by definition, is a collection of paths. Some paths lead nowhere, while other paths lead to a goal. The English are well known for their garden mazes. Usually they are created by high green hedge rows which are much taller than even an NBA professional basketball player.

I remember being on a business trip to England a few years back. On an afternoon off I visited a wonderful maze at a large estate in the British countryside. I had to return to the local train station on time to take the 4:17pm train back to London. If I missed this train, I would miss a play in London’s East End that evening, and I was fortunate to have a ticket to see this hit.

A labyrinth, as constructed inside of cathedrals or in gardens, allows you to always see the “goal”. There are no tall hedgerows which block your vision. There is a path in which the walker can have faith because it will always lead to the “goal”. Yes, there may be times where you feel the path is almost at the goal, but then the path (like life) makes a big twist taking you to the outer walls with the circle. However if you trust the path and keep walking, you know you will reach the goal.

Reaching the “goal” inside of the circle is not the end of the story, because a labyrinth is like Joseph Campbell’s “hero’s journey.” We pray inside the “goal” and take in the “gift” or “pearl of great price.” Then we return to the entrance of the labyrinth with the purpose of sharing this “gift” with the world.

Two recent experiences with Unity of Roanoke Valley’s labyrinth really demonstrated the above for me. The first experience was praying and walking with others in the labyrinth during the recent Inauguration Day. You could feel the prayers for peace, healing, and unity. 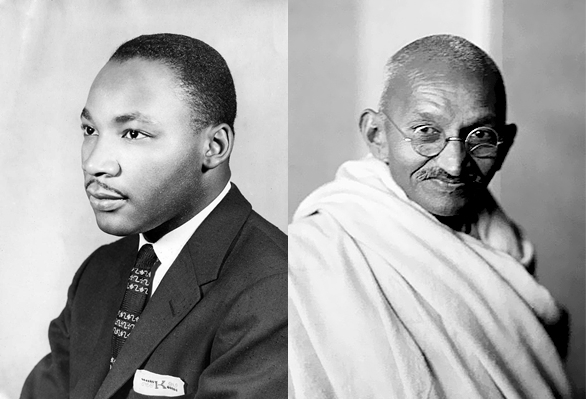 The second experience was at the start of the Season For Nonviolence. Started by Arun Gandhi, the grandson of Mahatma Gandhi, the Season For Nonviolence celebrates the philosophies and lives of Gandhi and Rev. Dr. Martin Luther King, Jr. Many Unity churches participate in this celebration which runs from January 30 (the anniversary of Gandhi‘s assassination) to April 4 (the anniversary of King’s assassination).

April 4th is also Easter this year. A labyrinth walk is a key part of URV’s Easter celebration this year. There are labyrinth walks each month for the Season For Nonviolence. URV is so blessed not only with a beautiful labyrinth, but also with a person like Grace Wood who champions this jewel.

A minister friend in Texas recently told me a story that demonstrates the difference between a maze and a labyrinth. My friend was eating pancakes, and some drops of the ersatz maple syrup fell to the floor. One drop landed in the middle of a large floor tile. Several ants went to the middle of the tile, but after they ate they could not find a path to freedom and the great outdoors. A second drop landed in the grout between two of the large tiles. Other ants feasted on this drop. They were able to follow the de facto path made by the grout lines/indentations between the tiles. This path led them to freedom and the great outdoors. Labyrinths are like that. Recently another good friend gave me a great acronym for GOD (GOD = Get OutDoors).

I think it is insightful to ask: How am I viewing my life and the world? Do I see it as essentially a very frustrating maze? Do I think I will never reach the “goal?” Or do I see my life and the world as fundamentally like an enriching labyrinth? Do I trust the path despite the twists and turns?

My first Unity minister, Rev. Helice Green, often ended our services by saying: “We are on the upward, forward, and progressive path of Spirit. The mark of success is upon us.” Does that sound like a maze or a labyrinth?

Think about the Prayer For Protection:

The light of God surrounds us.
The love of God enfolds us.
The power of God protects us.
And the presence of God watches over us.
Wherever we are God is.
And because God is,
All is well.

Now does that sound like a maze or a labyrinth?