When my oldest daughter, Catherine, was a little girl, we would watch movie trailers – i.e., film coming attractions – in darkened theaters.

Catherine would sit there with a tub of buttered and salted popcorn on her lap, as we judged the trailers with either a “thumbs up” or “thumbs down.” We would pretend we were Siskel and Ebert. 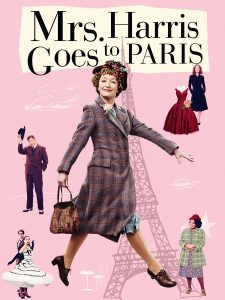 One time little Catherine voted with two “thumbs up.” It was after seeing the trailer for The Rug Rats Go To Paris. “Dad, we have to see the Rug Rats’ movie the day it opens,” she said.

Recently I was in a movie theater watching one dreadful trailer after another. They all seemed to start with the sentence, “In a world that no longer … yadayadayada.” There were pictures of people running in terror on city streets as buildings collapsed around them and something horrible happened. Then there were pictures of superheroes and supervillains or Tom Cruise and a starlet.

Needless to say, I gave all of those trailers a “thumbs down.” I was hoping they would show us a “silence your cell phone” message or “change your kitty litter” public service announcement instead of another trailer.

But then something wonderful happened. They showed a coming attraction for a new movie, Mrs. Harris Goes To Paris. I was thrilled by it and decided to see it. I am glad I did because it is a delightful tale that needs to be told right now. 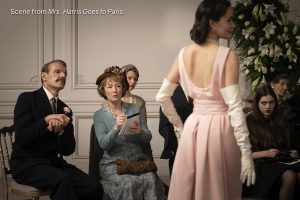 Based on a 1958 novel by Paul Gallico, the historical comedy-drama tells the story of an English cleaning lady who becomes obsessed with couture gowns designed by the French fashion designer Christian Dior. The film is set in 1950s Paris, which is still recovering from World War II. There is a nasty garbage strike in the “City of Lights,” and one can sense some fundamental cultural changes and upheavals happening under the surface. This is a Paris that sometimes longs for the bohemian era of the 1920s or the “Belle Époque“ of the 1890s.

In the midst of all this, several fashion designers in Paris are trying to rekindle the spirit of elegance, beauty, and refinement in the modern world. Christian Dior is one of the fashion designers leading this movement. He has created a house of fashion catering to the very wealthy, the old aristocracy, and the new up-and-coming fashionistas/celebrities.

Into this world wanders a very strange character. Many would say that Ada Harris – fantastically played by Leslie Manville – has no right sticking her nose into fashion a la Paris. 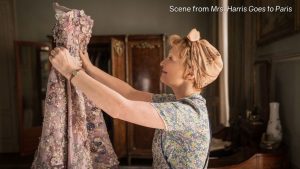 Mrs. Harris has had a tough life. She lives in a London apartment that has seen better days. Her husband was killed during World War II, and his picture is still on the nightstand beside her bed.

To earn a living, Mrs. Harris cleans people’s homes. It is not an easy existence, and the gray dullness of post-World War II England sometimes gets to her. On top of this, some of the people she works for mistreat her. While they may have the title of “Lady” in front of their names, they are anything but a “Lady” by how they treat Mrs. Harris. It reminds me of what Jesus said, “What you did to the least of these, my brothers and sisters, you did to me” (Matthew 25:40).

One day, Mrs. Harris sees a dress while putting clothes away. It is so beautiful that it captures her imagination. She finds out that Christian Dior designed it. Right then, Mrs. Harris dreams of owning a Christian Dior gown. The beauty, the elegance, and the refinement represented by the dress are something that Mrs. Harris wants in her life.

She finds out how much money such gowns cost – they cost a fortune! She works hard and saves. Finally, when she has the money, Mrs. Harris goes to Paris to fulfill her dream. 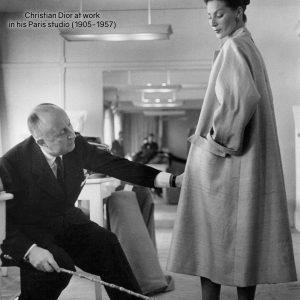 When she gets to Paris, she is amazed to discover that the House of Dior does not operate like a department store. You do not simply walk in and pick out a gown. You must be invited to a showing where beautiful models display the latest fashions.

I won’t spoil all the twists and turns for you, but this English maid winds up the guest of an old-world aristocrat, and she has a front-row seat at the Dior show. Mrs. Harris is like that little boy in the famous story “the emperor’s new clothes.” She asks the right and challenging questions that nobody else seems to have the guts to ask.

She is also like Edith Bunker from that old TV show All In The Family, and in a very interesting way, she starts charming people at the House of Dior. Unbelievable as it may seem, the House of Dior agrees to make the gown that Mrs. Harris desires.

Meanwhile, the fact that the Paris of the 1950s is very different from the world of the 1920s or 1890s is starting to catch up and impact the House of Dior. Times have changed, and high-end fashion designers do not seem to be able to stay financially afloat by just appealing to the upper crust of society. It has become more of a middle-class world. 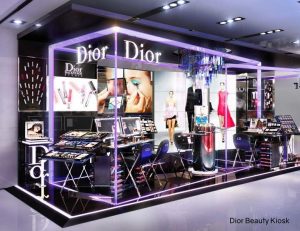 But the House of Dior is learning from Mrs. Harris and what she represents. Many women out there want elegance, beauty, and refinement in their lives. They want what a designer like Christian Dior can bring to their lives. They may not be able to afford a specially designed wardrobe. But they would be willing to buy many other products that someone like Christian Dior could create and sell.

Paraphrasing an old saying, “If you can’t bring other women like Mrs. Harris to Paris, then Dior will bring a bit of Paris to Mrs. Harris’ sisters.” Needless to say, Christian Dior was saved by implementing this new vision.

I was curious to see if there was an actual Mrs. Harris. No, the novel and movie are fiction. But Mrs. Harris is a representation and personification of real forces that altered the fashion industry. 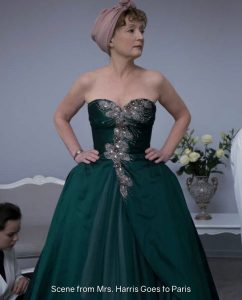 So what becomes of Mrs. Harris’ actual Dior gown? It is a bittersweet story, which I will not spoil for you. But I will tell you that, like in the Book of Job, there is a beautiful and happy ending.

I think this story touched me because it was about a woman who had a hard life and was living through gray times in her nation. And yet her soul was captivated by art, beauty, and elegance. Mrs. Harris was willing to follow her dream, and in doing so, she uplifted so many other people.

Leave it to a minister to think of two Bible verses after seeing this movie. But the two verses that came to mind are where Jesus says, “I have come that they may have life and have it abundantly“ (John 10:10). He also said, “It is the father‘s good pleasure to give you the kingdom” (Luke 12:22). At a gut level, Mrs. Harris believed in these two verses.

Please let me know if you give Mrs. Harris Goes To Paris a “thumbs up” too.