When I was decorating my office at Unity of Roanoke Valley, one of the first things I did was hang a picture on the wall over the computer. It is a picture of the Tower of Babel, painted by Pieter Bruegel the Elder.

Bruegel was one of the most famous Dutch and Flemish painters of the 1500s. His paintings of landscapes and peasant scenes used many pioneering techniques that had a major impact on Western art. When people come into my office for pastoral counseling or some other matter, they often ask me about Bruegel’s painting. I tell them that I loved this picture since I was a little child. 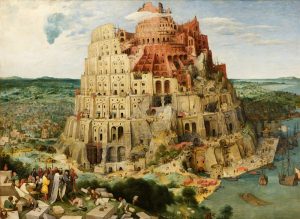 It shows the construction of a large tower reaching up to the clouds, and this tower exists within a medieval city. You can see the city’s harbor, masted sailing ships, and docks. You can see the working people at all of their different trades. You can see the gentry and nobles looking so proudly at their tower to the heavens, and they seem to have no idea what will really happen because of their “public works” project.

Some leading modern historians have gone back to this painting – and others – by Bruegel to learn more about how people lived during the Northern European Renaissance. But my first attraction to this picture as a kid was just because I liked it. It pulled me in. Way before I ever saw the Disney movie, Mary Poppins, I fantasized about jumping into this picture and spending the day in this 16th-century port city with a big tower.

My framed copy of the painting has been with me for many years – through think tanks, the Library of Congress, United Way, Unity Center of Tulsa, and now URV. Sometimes I think I would have gotten fewer comments about a painting on the wall if it would have been a modern art canvas in which the artist used a squirt gun to apply the paint and an electric toothbrush to spread the goop around. Many of the comments have been, “Why did you put THAT on the wall?” (And often this has not been said in an encouraging or engaging tone of voice.) 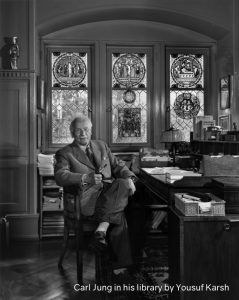 But I have come to learn much more about this painting on a spiritual level, and it means even more to me now. For example, Carl Jung said that Bruegel‘s painting of the Tower of Babel is the first major example of a mandala in Western art. Jung was, besides a leading psychiatrist, a gifted artist, and he painted many mandalas. These circular symbols represent psychic wholeness, spiritual completion, and connection with the source of being. He saw the tower in this painting as a great mandala.

Then, as I became interested in Spiral Dynamics and the evolution of spiritual consciousness, I started to see Bruegel’s work as a mandala and a spiral reaching out to new possibilities. Some of the technology depicted by the Dutch/Flemish artist in the upper levels of his tower were new inventions in his day. 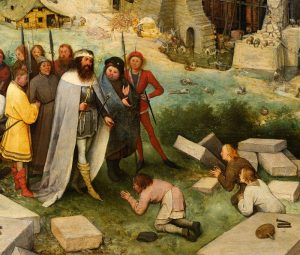 When I became an economist, I told people that this picture was the first know painting in western art of a council of economic advisors. If you look at the lower left side of this painting, you will see a king, and in front of him are several tradesmen all bowing and scraping. I would tell people that these tradesmen were a council of economists willing to produce any numbers – or interpretation of the numbers – that the ruler wanted.

But this painting by Bruegel has taken on an even deeper significance for me in recent years – and a significance in line with the Biblical Tower of Babel. The great 20-century Protestant theologian, Reinhold Niebuhr, was the head of Union Theological Seminary in New York City for many years. In the 1930s, Dietrich Bonhoeffer was at Union Theological Seminary, but he wanted to go back to his homeland in Germany. Bonhoeffer was one of the founding pastors of a denomination resisting Adolf Hitler and the Nazi Party. Niebuhr tried to convince Bonhoeffer to stay in America and wait for the Allies to win World War II. Then he suggested that Bonhoeffer could go back to help rebuild Germany on a spiritual level. Bonhoeffer decided to go back to Germany in the 1930s, and he was eventually arrested and executed by the Nazi regime.

Niebuhr said something which I think gets right to the central point of the Tower of Babel, “Nothing worth doing can be achieved in our lifetime.” If that is the case, then why dream and pray “big?” Why attempt anything grand that could move us up the spiral? Niebuhr’s response to these types of questions was that “we must be saved by hope. Nothing we do, however virtuous, can be accomplished alone; therefore we are saved by love,” he added. Hope and love are the responses to the reality of the Tower of Babel, I believe.

Another great Protestant theologian, Martin Luther, shared an important insight into how we can respond to the “Tower of Babel” phenomenon (I.e., our dreams often won’t come true in our lifetime, and even if they do come true, the final result could be very different from what we envisioned.) Luther was asked what he would do if he knew that today was the last day of his life? He responded that if he knew he would die today, he “would plant a tree.”

That seems like such a foolish response. Luther would not live to see the tree grow. He would never enjoy the fruit, shade, or beauty provided by the tree. But I agree with Luther. Even if we knew that today is our last day, we should keep on with Niebuhr’s hope and love. Even if we do not live to see our dreams and visions come to fruition, we should continue to – in the words of Dolly Parton – “dream big and pray big.”

And yes, another lesson from the Tower of Babel is hubris. Excessive pride and self-confidence in the ego seem to be a major factor in 21st Century life. But let me revise Theodore Roosevelt’s dictum for these modern times: “Speak softly and carry big Mala beads.” (Mala beads are often used in Hinduism, Jainism, Sikhism, and Buddhism during meditation and prayer practices. You can also get Mala beads in the URV and Unity Village bookstores.)

A dear friend of mine recently had a real Tower of Babel experience. Paul (not his real name) is a professor of business and economics at an American college. He was asked by the “powers that be” at the school to create a great program to teach business management to undergraduates. Well, Paul created such a program, which I think was an excellent model, but the “powers that be” changed horses in midstream, as it were. They were now not interested in making this plan a reality. I believe the plan would have worked and even have made money for the college. But most importantly, it would have been an excellent educational model that other colleges and universities would have emulated.

Paul spent several years letting go and letting God. Paul’s God is not by any stretch of the imagination the traditional theistic God. But he found peace and was able to let go of this tower that would never be completed. God – either traditionally or non-traditionally defined – moves in mysterious ways. Paul has won a Fulbright Fellowship grant to go off and spend some time in a third-world county where he will teach and help build a business education program. 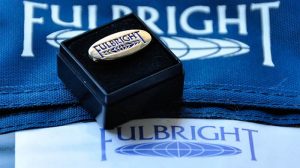 So when I look at Bruegel’s Tower of Babel, I see loss, sadness, a warning about hubris, and a major application of the law of unintended consequences. But I also see hope and love and the desire to plant a tree even if this is our last day. Who knows what metaphysical Fulbright Fellowship grants are in our future?