Linked with the One: More Than Our ‘Ace in the Hole’

When I was an undergraduate at Columbia University, getting up before noon on Sunday mornings was not my strong point. In retrospect I wish it had been, because I could have taken an easy subway ride down to Lincoln Center on Sunday mornings.
This is not because I wished I had gone to Lincoln Center to hear performances by the New York Philharmonic or Metropolitan Opera. I liked seeing concerts and operas by these great cultural institutions, but student discount tickets were much cheaper on weekdays than for weekend performances.

No, I wish I had gotten up before noon on Sundays so I could have heard Eric Butterworth preach. This great Unity teacher’s congregation had grown so large that they rented a Lincoln Center hall for their Sunday services. Back then I could not have cared less about God and spirituality. I would have dismissed what Eric was saying. Yes, sometimes youth seems to be wasted on the young. I was going through what I needed to go through to get me to where I am today.

During World War II, Winston Churchill said, “You can always count on the Americans to do the right thing, after they have tried all of the other alternatives and failed.” As an American, I guess this applies to me on an individual level. 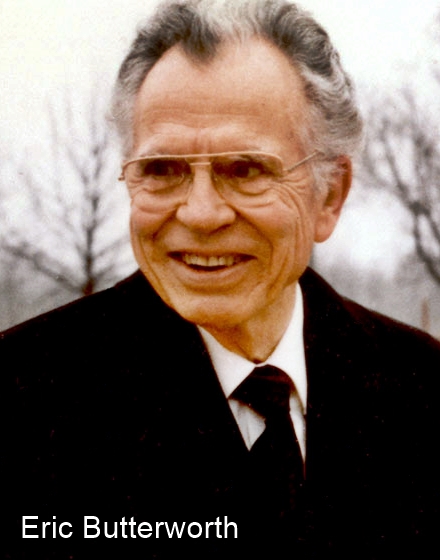 As I became interested in Unity in the mid-1980s, it was Eric Butterworth who really spoke to me. Charles Fillmore, the co-founder of the Unity movement, said and wrote many wonderful things. However, I found his language and style often to be very difficult. On the other hand, Eric’s writing style hit me like Earnest Hemingway’s writing: crisp, clear, bold, and to the point!

Two books by Eric made a deep impact on me back then: Spiritual Economics, and Discover the Power Within You. By then I was a working economist, and Spiritual Economics struck me as one of the best books I had ever read on the so-called “dismal science.” Eric’s book really showed me the link between the stuff I learned about economics in grad school and the spiritual principles I was learning as a Unity newbie.

It was Discover the Power Within You that opened so many important doors for me. At Unity of Roanoke Valley we are currently in the middle of an online class on this insightful book. I am thrilled by the wonderful discussions that take place in this class.

In Discover the Power Within You, Eric dramatically and effectively presents Unity’s first two principles: There is one presence and power in the universe, a good and loving God; and second, there is a Divine Spark inside of us all which is our real essence. Not only does Eric cogently explain these key principles, but he helps us draw out the remarkable implications of these spiritual truths as they relate to our day-to-day lives in the real world. Oprah Winfrey said that this book changed her life.

One topic that keeps coming up in our class is the role of the ego in all of this. A number of people come to Unity after they have experienced recovery from an addiction through a 12-Step fellowship. The first of the 12 Steps says that the addict is powerless over their addiction. Unity’s basic principles – and Eric’s book – tell us that we have infinite power inside of us. This seems like an insoluble paradox. What are we to make of it?

The way that I solve this seeming conundrum is to draw near to two verses in the Bible. The first verse is John 5:30. In this verse Jesus says, “In and of myself I can do nothing.” The second verse is Philippians 4:13. In this verse the apostle Paul writes, “I can do all things through Christ who strengthens me.”

These verses at first glance seem in contradiction. I think what Jesus is saying in effect is that at the ego level we can’t accomplish many things; while Paul is pointing out that when we know that we are one with the One – and live through our link and our unity with the Christ within – then we can do things beyond our wildest dreams. In realty, we have discovered the power within!

I think when we really get on a heart and head level with what Eric Butterworth is saying about God, then it is very much like the experience I had opening that email about the new president. The cosmic “corner office” is occupied by somebody who is on our side, loves us, and can be our “ace in the hole” when we face the challenges of life. In fact, the cosmic “corner office” is right inside of us. We are always intimately linked with the One.

So I slept away my chances to hear Eric Butterworth speak during my undergraduate years. There are many different ways one can hear Eric speak now. You can listen to many of his wonderful talks by going to TruthUnity.net or YouTube. The Unity Village archive also has great “nuggets” from Eric, and of course there are his books – which I believe have stood the test of time.
Discovering this power within is much more than our “ace in the hole.” It fills a very big hole that has been inside of so many of us. As St. Augustine put it, “There is no rest until we rest in You.”