Love Letters in the Sand

Recently I was walking on a beach near the water. Nearby there were several children building sandcastles. Close to them was another child who was writing in the sand with a stick.

There were birds flying overhead and puffy white clouds in a rich blue sky – a perfect kind of day. An old song, made famous by Pat Boone, came to mind. It made it to the top of the charts and was called Love Letters In The Sand.

How you laughed when I cried
Each time I saw the tide
Take our love letters from the sand. 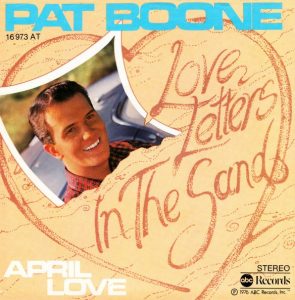 While Pat Boone made it famous, the song was first recorded in 1931 by Ted Black and His Orchestra. Love Letters In The Sand has an even richer history since it was inspired by an 1881 story entitled “The Spanish Cavalier” by William D. Hendrickson. As Shakespeare put it, “The course of true love never did run smooth,” and this theme has resonated with audiences down through the ages. It was enough to keep Pat Boone at the number one spot on the Billboard charts for five weeks in a row one summer.

Many of the world’s great spiritual teachers have pointed out that it is not just sandcastles and love letters in the sand that will invariably be washed away. The Buddha insisted that nothing – absolutely nothing – will last in the long run. This was a key factor behind his first Noble Truth. He said that life is suffering. Even if you are in the most fulfilling love relationship, the reality is that one person in the relationship (in most cases) will die first (and in rare cases, both lovers may die at the same time). But this fantastic love relationship is not going to go on forever. Even if both people are alive, the love relationship itself may die. 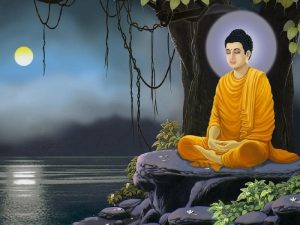 The Buddha’s first Noble Truth is most often translated into English by using the word “suffering.” But some leading scholars have suggested that a better translation of the first Noble Truth from the Pali language into English would be: “Life is discontent.” It is discontent because – to quote The Rolling Stones – “you can’t always get what you want.” Even if you do get what you want, you often find that the joy and peace are not lasting. It is as permanent as a love letter in the sand.

A quick crash course in Unity Metaphysics: Unity envisions a time before time and a space before space. There were infinite possibilities and infinite potential. Then something even bigger than the Big Bang happened, and there was a Relative Realm and an Absolute Realm.

In the Relative Realm or this material world, change is always happening. Nothing lasts forever. It is a state of sandcastles and love letters in the sand. We can try to hold back the tides, but we will not be successful in the long run.

But in Unity Metaphysics, this is not the end of the story because there is also the Absolute Realm. This is the realm of Divine Mind, of unchanging Truth, of the Perennial Philosophy. We also believe that we can pull more of this Absolute Realm down into the Relative Realm. At times we can become so centered that we realize, like the apostle, Paul said, “We live, move, and have our being” in this Absolute Reality. That is why we call “death” a “transition.” 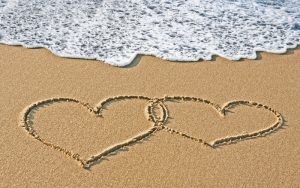 I recently came across a beautiful true story that captures this essence of living and dealing with both the Relative and Absolute Realms.

It happened to Mary Anne Adams, who lives in West Sparta, New York. West Sparta is east of Buffalo and south of Rochester. Mary Anne’s husband, Adlai, started playing pickleball, which like is a combination of tennis and ping-pong. Adlai led a group that transformed old and dilapidated tennis courts into new pickleball courts. The local newspaper wrote a story about these efforts and mentioned Adlai. They even spelled his name right, Mary Anne thought.

Both Adlai and Mary Anne love the great outdoors, especially the Adirondacks mountains. On their wedding anniversary weekends, they often went camping and would exchange love letters. Mary Anne wrote her love letters in a journal which she would show to Adlai. 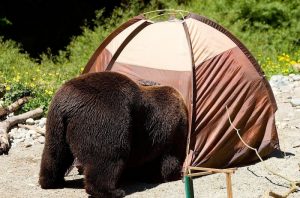 Well, on one wedding anniversary weekend in the Adirondacks, they went for a hike. When they came back to their camping site, they discovered that a bear had trashed the place. The tent was destroyed, the food was gone, and Mary Anne’s journal with the love letters was missing. They searched for the journal, but they could not find it. Heartbroken, they left for their home. So far, this sounds like a pure Relative Realm story.

Time passed, and one day as Mary Anne returned from shopping, she saw a strange car in the driveway. Adlai was talking to a man and a woman. Her husband told Mary Anne that this couple had been camping, and they found a journal of love letters in the sand. The journal was damaged, but the love letters were still readable. Then the couple saw the pickleball story in the newspaper, and something told them that the Adlai of pickleball fame was the same Adlai in the love letters. Mary Anne felt an incredible wave of gratitude to have her journal back. 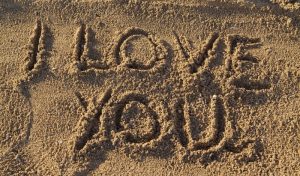 Things happen in the Relative Realm that can hurt, and all too often we can let the beauty of the Absolute Realm slip from our minds. But when we can remember the Absolute Realm, then we can have the faith, zeal, and love to continue to write love letters in the sand despite the tides.