MANK: Wanting It Both Ways

Several of my children have recently asked me, “Dad, what do you think are some of the best movies you’ve ever seen?”

My six year old, Therese, has not asked me this question. But she did recently ask me, “Dad, when you were a kid were there still dinosaurs roaming around?”

In terms of the best movies, I have always placed Citizen Kane on that list. Released in 1941 – and written, directed, produced, and starring that larger than life personality, Orson Wells – the movie is a thinly disguised biography of the media baron William Randolph Hearst. The central character in the film is Charles Foster Kane, played by Wells. 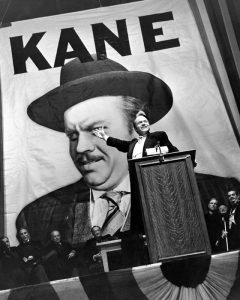 The film traces Kane’s life starting out as a muckraking and reformist newspaper publisher. Kane then goes in to politics, but loses. As the years pass he becomes very cynical, and he slowly transforms into the very things he despised in his youth. Unfortunately, Kane does not age gracefully, and he dies with his young girlfriend on an humongous estate that resembles Hearst’s San Simeon castle. Kane’s dying word is “rosebud.” In the movie a reporter is trying to discover what “rosebud” meant to the media mogul.

I mentioned that Wells claimed to have written Citizen Kane. This claim is a very hotly disputed topic among movie historians and critics. Officially, the credit for writing the script for Citizen Kane is given to both Wells and Herman J. Mankiewicz. Both Wells and Mankiewicz were awarded Oscars for writing Citizen Kane. But several leading scholars of tinsel town believe that Mankiewicz did well over 90 percent of the work. Now along comes a great new movie – that is currently up for ten Academy Awards, including “Best Picture” – about the making of Citizen Kane. The film is called Mank, and it is streaming on Netflix.

In many ways this picture is about so much more than just Citizen Kane. It is really about Hollywood and 1930s America, as well as some unseemly tendencies that have been magnified by our modern technology and social morays. 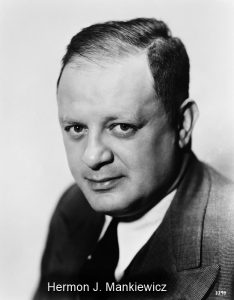 Mankiewicz started out in New York as a writer and newspaper theater and social critic. Alexander Woollcott said that Mankiewicz was “the funniest man in New York.” Mank, as he was affectionately called, drifted to Hollywood where he became a highly paid screen writer for several leading movie studios. He won writing credits for The Wizard of Oz, Dinner at Eight, Pride of the Yankees, and The Pride of St. Louis.

But what Mank was really known for was this: You have a sick script, and you need a doctor double-quick? Well, ask Mank to make a house call, and you’ll have a script that will walk on water! Many times Mank was the “ghost writer” who saved the day. He got paid “big bucks,” but he was not listed as the writer of the script.

So in comes Orson Wells, fresh from scaring America with his War Of The Worlds radio broadcast. He has this idea about Citizen Kane, but he doesn’t have a script. Wells asks Mank to ghost write for him. Mank needs the money. He suffers from serious alcohol and compulsive gambling problems. Also, Mank knows Hearst, Louis B. Mayer (of MGM), and Marion Davies (who is Hearst’s young girlfriend).

Mank pours his heart into the script, and he knows that he is writing some of his best work. For many years the movie studios were willing to overlook Mank’s alcoholic binges, and the they were even willing to pay off some of his gambling debts. But on several occasions Mank has told his bosses – like Louis B. Mayer and Hearst – exactly what he thought of them.

The Netflix movie leans on several real events from the 1930s. Back then the writer Upton Sinclair ran for governor of California. Sinclair was like the Bernie Sanders of that day. Sinclair’s novel The Jungle was a key factor that led to the creation of the U.S. Food and Drug Administration. I will always remember one line from Sinclair’s riveting novel:

Mary had a little lamb,
And when she saw it sicken,
She shipped it off to Packingtown,
And now it’s labeled chicken.

Several of the film studios started creating phony commercials – with actors – saying that they would vote against Sinclair because they feared their life savings would be taken away. In a new book, How Fascism Works, Yale professor Jason Stanley goes back to the media lies and disinformation used against Sinclair in the 1930s. Stanley shows how it cost Sinclair the election, and he sees this incident as the forerunner of modern smears on social media/cable news/etc.

So here’s the rub: Mank sees things like this going on in Hollywood, and in his drunken stupors, he is telling the Mayers and Hearsts of the world what he thinks. But he can’t walk away from it. If he does, who will pay off his gambling debts, and see that he gets home in one piece? 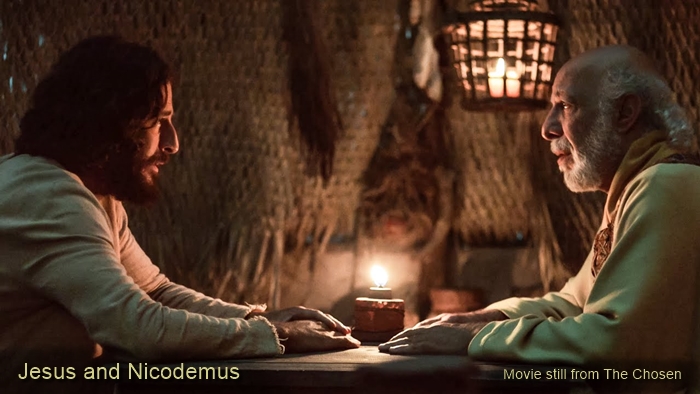 This is the dilemma that Mank – and so many others – face. We want to eat our cake and have it too. We want to have it both ways. It reminds me very much of the rich young ruler who came to Jesus and asks what else he can do. Jesus said that he should sell all his possessions, give to the poor, and follow him. The rich young ruler slunk away. It reminds me of Nicodemus who came to Jesus in the nighttime. (God forbid that he should be seen with Jesus in the daytime.) Nicodemus knew what was right, and he deeply admired Jesus. But if he publicly acknowledged Jesus, he would lose his position in the Sanhedrin. He would lose all his privileges and perks.

Probably the best scene that has captured this dilemma was written by Shakespeare. Hamlet’s uncle murdered Hamlet’s father, and now he is king. Hamlet sees his uncle praying, and thinks that would be a good time to kill him. But then Hamlet thinks that would be a mistake because his uncle is seeking forgiveness from God. If he kills him now, his uncle will go to heaven. Shakespeare let’s us see the irony of the situation. What the uncle was actually saying was, in effect, that he could not pray for forgiveness while he was holding on to the crown. He realized that he couldn’t have it both ways.

I have experienced wanting it both ways, or wanting to have my cake and eat it too. Back in college I wanted to be a lawyer at a Wall Street firm on Monday, Wednesday, and Friday. On the other days of the week I wanted to be a student revolutionary-antiestablishment-Turn on/Tune in/Drop out. I guess you would have had to put me down in the conflicted column.

Mank may have won the Academy Award for writing Citizen Kane, but no movie studio ever hired him again. Sometimes it can be very hard to just walk away. Sometimes we can do that only after the door has been slammed in our face. But it takes what it takes.