Meaning and No Easy Answers

I am a big fan of David Brooks!

David has been a columnist with The New York Times since 2003, and he is the author of several books that have meant a lot to me. The David Brooks book that has inspired me the most is The Road to Character. 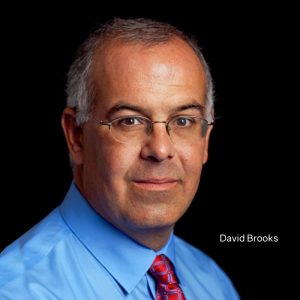 He points out that our society is very good at producing résumé virtues, and many excel at that. But he is sad that our society seems to do so little in teaching us how to enhance our eulogy virtues, and at the end of the day, it is these virtues that count the most. A life built on mostly résumé virtues and very few eulogy virtues usually ends up being shallow with little meaning. It is also a recipe for stunted character development, he notes.

Brooks’ most recent book, The Second Mountain, explores what he calls “the weavers of society.” These are often social entrepreneurs who are creating a better world and founding institutions that deal with some of our most pressing social problems. While ministering in Tulsa, I devoted four weeks to a Sunday series on Brooks’ The Road to Character. I’d like to do a multi-week Sunday series in Roanoke on Brooks’ The Second Mountain. 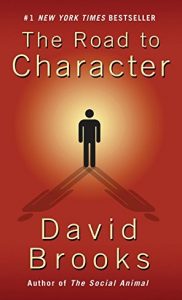 After seeing and hearing Brooks on NPR, PBS, and numerous podcasts, I was delighted to meet him at a United Way conference in Pittsburg. I got the chance to be his “angel” at the conference. At all United Way events, a staff member is appointed as an “angel” to a guest speaker and sees that their questions are answered. I found David to be like a brilliant and gentle rabbi who is full of wonderful earthly and higher knowledge.

He is often more conservative than me. Brooks’ mentor was William F. Buckley, the intellectual father of the modern conservative movement. However, David often asks the right questions and gets us thinking, even if we disagree with his answers.

With the above in mind, I was moved by a column he wrote about one of his recent talks. The audience wrote down their questions on cards. Of course, the majority of the questions were about politics, society, or culture.

David received one card that really “haunted” him. This card read, “What do you do when you’ve spent your life wanting to be dead?”

Brooks was taken aback by this question. He didn’t answer it that evening because, at the time, he didn’t know how to respond. But he was spooked by the question and put the card on his nightstand.
As he mulled the question over in his mind, a response started to form. He wished that he had said something like the following, “I don’t have an answer for you, but I do have a response. My response would start with the only thing I know about you: You have been through a lot of pain over the course of your life. You have amazing powers of endurance because you are still here. I know you are still fighting because you reached out to me. My response begins with deep respect for you.”

In my life, I’ve become close to several people who have attempted suicide – one successful in taking his own life, and several others not. It is so easy to look down on people who attempt to take their own life. When the monkey is not on your back, it is easy to be scornful and judgmental. But when you are the one lugging this ball and chain, all of a sudden, things become a very different story. I believe this is a key reason why Jesus said, “Judge not lest you yourself are judged.” Brooks’ first response of compassion and empathy is really a thing of beauty.

Brooks adds, “The other thing I know is that you were not alone. There is always a lot of suffering in the world, and over the past few years, we have seen high tides of despair. The sources of people’s pain may be different – grief, shame, exclusion, heartbreak, physical or mental health issues – but they almost always involve some feelings of isolation. Of being cut off from others.” 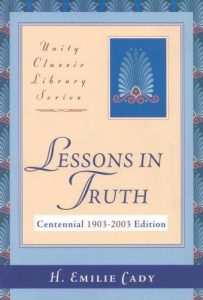 COVID-19 has certainly added to the sense of isolation from people. But I think there is also another type of isolation and feeling cut off. This is spiritual isolation and thinking that we are cut off from any loving Divine Source. Life starts feeling meaningless, and going through this excruciating pain starts to feel like a cruel and sick joke.

Unity pioneer, Dr. Emily Cady, wrote about this sense of spiritual isolation in her classic, Lessons In Truth. She said that ignorance of our connection with the Divine was the source of so many of our troubles. Knowing and feeling this Divine connection is the ticket out of this deep hole. Also, sometimes it takes falling into a deep dark pit before we can see the light.

David’s response soon circles around to that great German Jewish psychiatrist, Viktor Frankl, who was arrested by the Nazis and thrown into the Auschwitz death camps. “There were many people in the camps who wanted to die more than live. In Man’s Search For Meaning, Frankel wrote that he would try to help them recognize that ‘Life is still expecting something from them; something in the future was expected of them,’” David noted.

Frankel loved to paraphrase the great German philosopher Friedrich Nietzsche by saying, “He who has a why to live for can bear with almost any how.” 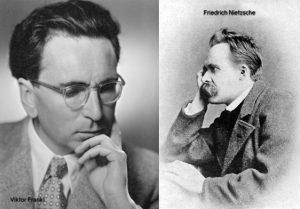 But how can one do this right in the middle of suicidal pain in the 21st Century? Here is what I find really interesting! Yes, David Brooks is a practicing Jew, but not an Orthodox Jew. Also, most of his writing is about secular subjects. Nevertheless, where does David Brooks go for examples of this finding meaning and overcoming intense pain? He goes to the Bible – yes, the Bible.

David writes, “The Bible is filled with characters who are at times overwhelmed with life and wish they could be rid of it – Jonah, Elijah, Job, and even Moses. They are so central to the biblical story because desolation is part of the human experience, part of the bricks and mortar with which we construct our lives.”

He adds, “Suffering had such a profound and unpredictable effect on those characters, as it does on all of us. Suffering can make people self-centered, loveless, humorless, and angry. But we all know of cases where suffering didn’t break people but instead broke them open – made them more caring toward and knowledgeable about the suffering of others. And the old saying that we suffer our way to wisdom is not wrong. We often learn more from the hard times than the happy ones.” 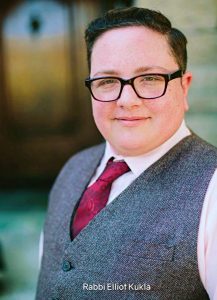 Brooks retells a story by Rabbi Elliott Kukla, the first openly transgender person to be ordained by the Hebrew Union College-Jewish Institute of Religion in Los Angeles. There was a woman who was prone to fainting and falling spells. People often bent down and tried to pick her up. However, this woman told the rabbi that what she wanted more than people trying to pick her up were people who could get down on the ground and be with her when she fainted and fell.

There are no quick and easy answers to many of these situations of intense pain. We can tell those who are suffering simple bromides. But it may be more important for us first to get on the ground and be with them – and be a loving and compassionate presence. We may be able to help those who have emotionally fainted and fallen to see a way out that affirms life, meaning, and the “why” to the “how.”

Perhaps we too can be better off by being haunted by David Brooks’s question on that card in that auditorium?