Neighbor-Helping-Neighbor: Now More Than Ever!

Stephen Henderson is a food and travel journalist, and his articles have appeared in Food & Wine magazine and Gourmet.

Stephen was on assignment in India, where there is still much poverty, and he discovered a soup kitchen that was open 24/7. Men, women, and children were let in, 600 at a time, around the clock for vegetarian meals at this haven. Stephen was so blown away by this soup kitchen and what it was doing that he volunteered to cook at the place for a week.

This experience led him to volunteer at numerous soup kitchens worldwide, including in Israel, South Korea, Iran, and other places in India. He has also volunteered at food kitchens in Pittsburgh, Los Angeles, and Austin. In fact, Stephen has written a book entitled The 24-Hour Soup Kitchen: Soul-Stirring Lessons in Gastrophilanthropy.

“It changed my life and gave me the courage to attempt mass cookery in other charitable settings around the world,” he says. Stephen hopes that his book can help inspire others to volunteer to nourish those in need. 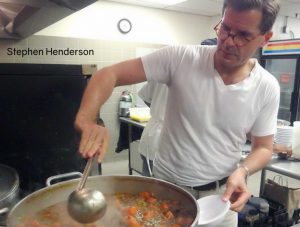 I bring up Stephen’s experience because hunger – real hunger – has been a significant challenge in the Roanoke Valley during the pandemic, and it remains a serious problem. It particularly impacts the young and the old, and it is a reality for households of all races and ethnic origins.

This past Sunday, I spoke about the importance of Neighbor Helping Neighbor. (Missed the service? Click here to watch it.) I do not believe that Neighbor Helping Neighbor is a peripheral issue to spirituality. The apostle James said that “the essence of real religion is to look after orphans and widows in their distress.” And he also commented that “faith without works is dead.”
Jesus said that “to whom much has been given, much is required.” He also told us that what we do “to the least of these, my brothers and sisters, you did to me.”

I noted that the Unity movement had not been that strong in the area of Neighbor Helping Neighbor in the past. But in recent years, this has changed. Unity Worldwide Ministries and many Unity congregations have strived for “a world that works for all.” Unity’s recent track record in environmental and LBGTQ+ issues has been quite good.

Unity of Roanoke Valley has shown a real interest in Neighbor Helping Neighbor. In the midst of the pandemic, URV has started – and sustained – The Giving Room, where people can make donations of food and clothing. The Giving Room in the URV annex building is open 24/7. Besides donations, it is also a great place to pray and meditate.

URV has a good history of leadership in Neighbor Helping Neighbor. After Hurricane Katrina devastated parts of Louisiana, URV helped organize and was part of a major interfaith effort among Roanoke congregations to help rebuild New Orleans. Longtime URV members Diane Strickland and Skip Brown shared with me their wonderful memories of all that URV people – and other Roanoke faith communities – did in this rebuilding effort. 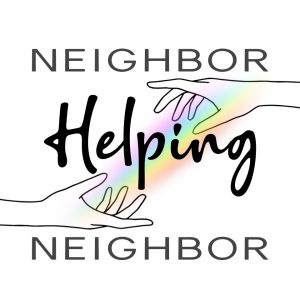 Several people have asked me if URV can expand its activities in terms of Neighbor Helping Neighbor. I want to do this, and I agree with the apostle James that these efforts are central to genuine spirituality. But instead of the minister creating “giving and volunteering” opportunities, I believe it would be better for this to happen in a community-based way where ideas “bubble up.”

So I ask you to please do the following:

~ First, ask yourself: “Where does my heart break in terms of community and social issues?” Is it the environment, the rise in inequality, violence, discrimination, or any other number of key areas?

~ Second, I ask you to write down your top three issues or areas (forms are available in the foyer at URV).

~ Third, I ask you to please email your top three issues or areas to me. Send your email to HP4360@gmail.com and put Neighbor Helping Neighbor in the subject line. Remember to include your name, email address, and phone number. 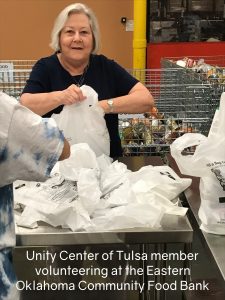 We will set up Zoom meetings or conference phone calls for people with similar top concerns to discuss ways to organize and work on that concern. We hope to facilitate ideas “bubbling up” and actions we can take as a spiritual community to help in these areas.

Thank you in advance for your emails, concerns, and suggestions. My primary reason for exploring Neighbor Helping Neighbor is because I believe that this is a central part of genuine spiritual growth. It is such a powerful part of all of the world’s great religions.

But there is also another reason to do this. When I was the Senior Minister at Unity Center of Tulsa, I saw that as we became more active in Neighbor Helping Neighbor activities through things such as partnerships with the Eastern Oklahoma Community Food Bank, the number of members significantly grew. Many of these new members were Gen Xers and Millennials who had children. Word got out about what Unity Center of Tulsa was doing.

There is also a third reason to move more in this direction. This year our Youth and Family Ministry program will have a curriculum based around two areas. Our children will study the 12 Powers, starting with Faith. They will also look at Neighbor Helping Neighbor. Wouldn’t it be great if the children had a strong and positive example from the Unity of Roanoke Valley adults? Wouldn’t it be great to see URV children and adults working together in these areas?

Again, thank you in advance for taking some time to think about the above and sending in your suggestions.