On the Road Again with George Washington

We may have celebrated Presidents Day yesterday on Monday, February 21, but George Washington’s actual birthday is today – happy birthday, George!

Remember, the average person back then was shorter when compared to the average person today. Washington was a towering 6 feet 2 inches in height. Google currently lists only 30 players in the National Basketball Association who are 6’2” tall. 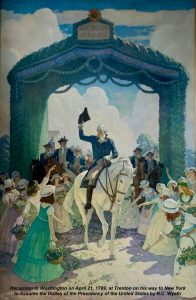 Not only that, but historian Nathaniel Philbrick reminds us that Washington, in his military uniform and on his horse, looked like central casting’s chief candidate for a general or president. There was a real gravitas to George Washington.

Philbrick says that Washington had the same charisma, the same “it” factor, that Napoleon exuded several years later. And here I think is some of the greatness of our first president: Washington did not use his “it” factor to become an emperor or dictator. Instead, he used all he had to forge a nation and “form a more perfect Union.”

One way that Washington did this was by traveling extensively through our young nation. While the old joke of “Washington slept here” is often said, there was much state-craft behind Washington’s arduous excursions through the thirteen original states.

Philbrick, who lives on Nantucket Island, was first noted for his books about the whaling era. His book on the Mayflower was a finalist for the Pulitzer Prize. He, of course, is a lover and excellent scholar of Herman Melville‘s Moby Dick.

But his latest book, Travels with George: In Search of Washington and His Legacy, often drifts far inland from the sea. During his years as our first Commander-In-Chief, Washington made major trips out to see the people and the land first hand. These sojourns deeply influenced him, and he profoundly influenced many of the people he met. 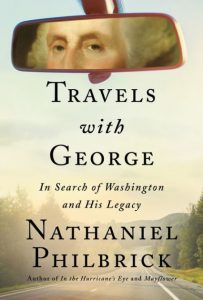 It is an understatement to say that presidential travel back then was much harder than flying in Air Force One today. Philbrick does an excellent job describing what interstate travel was like back in Washington’s day. You were taking your life into your hands!

Winston Churchill once described golf as a game where one “tries to get a small ball into an even smaller hole with equipment ill-suited to do the job.” In a way, that is what long-distance travel was like in the United States toward the end of the 18th century. Even the finest coaches lacked anything resembling shock absorbers – and the roads back then were even more rutted and potholed than many of the streets that exist today in Oklahoma.

Philbrick brings to life the roads, carriages, horses, inns, villages, and cities as they existed then. To give one example of the perils of travel, Washington‘s coach and horses needed to cross a river. They barely fit on the barge/raft and once the floating contraption was way out in the river, one of Washington’s horses – still hitched to the coach – was jolted into the river. Subsequently, all the other horses and the coach were pulled into the river. Miraculously, the horses and people were saved, and even the coach made it back to shore. 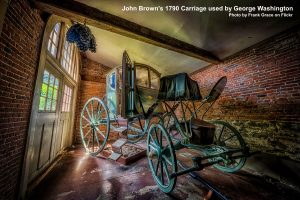 But a key reason for Washington’s presidential journeys was to help build a nation. It was an era where peoples’ egos and state interests came before the consciousness of being part of a nation or being Americans.

The Federal government had placed a tax on whiskey. This led to the famous (or infamous) so-called Whiskey Rebellion in western Pennsylvania. For many reasons, the South could have joined in on this rebellion. But Washington was able to explain why the tax was needed, and he listened to suggestions on ways the administration of the tax could be amended. Philbrick believes that the Whiskey Rebellion never caught on in the South because of Washington’s Southern travels.

However, a significant issue that Philbrick wrestles with is how we should deal with historical figures from past centuries when mores and laws were so different from ours? Philbrick does not let Washington or Jefferson off easily regarding slavery. For example, Philbrick tells us where Washington’s false teeth came from – and how he got them. All this is thoroughly repugnant to 21st-century mores and laws.

But the picture Philbrick shows is one of Washington born into a thoroughly slaveholding culture. And yet Washington grew in consciousness to where he saw slavery as an evil, and he freed his slaves upon his death. 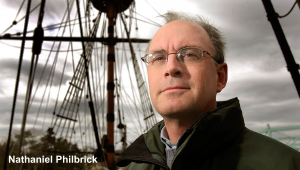 Philbrick shows some of the complications that Washington faced. First, Washington did not directly own many of his slaves. Instead, they came to Mt. Vernon through the Custis (i.e., his wife’s) family. Several times he tried to raise funds to buy these slaves so that he could free them in his will. Second, there were political considerations. Washington was concerned that if he freed his slaves, he would lose political support in the South, and a Civil War might have happened much sooner.

Part of me wants to say, “Excuses, excuses! Bring on Frederick Douglass and just do it!“ But it is so easy to judge 18th century people by 21st Century norms and laws. The people in the 24th Century could very easily do the same thing to many of us. Does that mean that everything in the 18th century gets a free pass? How should we make such decisions?

For me, there are certain things about Washington that I wish were different. However, I think the good far outweighs the questionable. I am NOT about to support any attempt to change the name of our nation’s capital. In fact, I still count the blessings that Washington was our first president and commander-in-chief during the revolution.

I think Philbrick really puts his finger on the most important attribute or spiritual gift of George Washington. He notes that Washington, in many ways, was not as great a thinker as either Alexander Hamilton or Thomas Jefferson. But Washington had something that our country desperately needed – and still needs to this day. 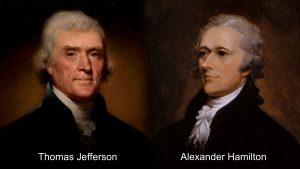 As Philbrick puts it:

“Unlike Hamilton and Jefferson, Washington didn’t need to be right all the time. He just wanted to make things work. He understood that feasible change is not obtained by righteous indignation; it’s understanding the road ahead is full of compromises if life is actually going to get better. Not Jefferson. When it came to his beloved French revolution, he insisted that ‘rather than it should have failed, I would have seen half the earth desolated.’ … This kind of philosophical dogmatism and melodrama was anathema to Washington. He had spent eight years of his life doing his best to prevent the United States from succumbing to the divisions and violence that were about to consume France. He understood the darkness of self-interest lurking beneath the most high-minded of ideals. And yet, despite his inherent skepticism concerning the human condition, he had an abiding faith in the American people.”

Needless to say, Philbrick’s latest book is a good read. He not only gives us a good historical window via Washington’s travels, but he also explores some old virtues that, I think, are sorely needed today.

And so on this Washington’s Birthday, I am trying to remember Philbrick’s words about Washington as we deal with our seemingly 21st-century polarization and challenges. While difficult, they may also provide us with golden opportunities to grow into some of Washington’s virtues.