Right Before Our Eyes: Now More Than Ever!

Before the new school year started, my daughters and I decided to get away for a week. I had a real spiritual experience during this week.

Now, I can hear some of you saying, “Well, he is a minister, and what do you expect from a minister? I bet he even has ‘spiritual experiences’ when he takes out the garbage.” Actually, I do sometimes have spiritual experiences when I take out the trash. Tuesday night is “take out the garbage night” in our neighborhood, and it very much reminds me of one of our important 12 Powers: The Power of Elimination. Getting rid of what is no longer serving us is so important. It makes room for what we need to grow.

So it was near the end of August, and I put my 17-year-old daughter, Rachel, on an airplane bound for Vermont, where she had a blast with her aunt, uncle, and cousin Ezra (who just got his first car. I can hear Chuck Berry playing in the car radio: “Driving along in my automobile/my cousin beside me at the wheel …” Okay, Chuck’s lyrics were a little different from that.) 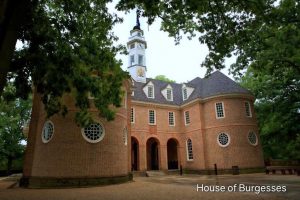 Meanwhile, I was looking forward to some great time with my six-year-old, Therese. Where should we go? I thought it would be fun and educational to visit Colonial Williamsburg. I remembered all the fun I had as a boy seeing this restoration of Virginia’s colonial capital. I remembered going to the House of Burgesses.

Back in fifth grade, when we were studying American history, we had the following question on a test, “What was the House of Burgesses made of?” I answered red bricks, and the teacher marked me wrong. She wanted to know the bicameral structure of the legislature. I showed my teacher the paragraph in the textbook that said the House of Burgesses was one of the first buildings in Virginia with all brick construction. I don’t remember if she gave me any credit for my answer.

I remember walking inside the Governor’s mansion at Colonial Williamsburg and seeing the printing shop and the “colonial” candy store. Yes, I got a tricorne hat and put it on with pride. I told Therese all about my boyhood visits to Colonial Williamsburg, and Therese responded, “Can we do some fun things when we are in Williamsburg?” 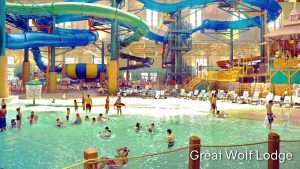 I checked the weather for that week and saw that the forecasts called for many rainy days. I said to myself, “Let’s see if there is a hotel with an indoor pool.” I looked online and discovered something called the Great Wolf Lodge. The place not only had an indoor pool, but it had an entire indoor (and outdoor) water park. I saw that it was very kid and family-friendly, so I made reservations.

When I told Therese that we would stay at the Great Wolf Lodge, Therese broke out into waves of joy and thanks! I had never heard of this place. But it seems they advertise heavily on YouTube, the Cartoon Network, and other channels. Therese was in Seventh Heaven. She even packed her suitcase six days before we were scheduled to leave – what a miracle! Only I had to tell her to unpack her toothbrush and toothpaste since we were not going for six days.

When we got to the Great Wolf Lodge, it lived up to all expectations. There was not only a queen-sized bed in our room, but it had another room decorated as a tent with bunk beds. Therese told me I could forget about sleeping in the queen bed because I was sleeping in the bunk bed. “And Dad, I’ll give you the bottom bunk so that when you fall out, it won’t hurt as much when you hit the floor,” she said. (For the record, I did not fall out of the bunk bed, and I even spent one night sleeping in the top bunk!) 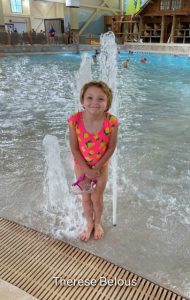 It was a blast swimming with Therese in the wave pool and going around the lazy river. The tube slides were awesome. Therese met new little friends to play with, and I would sit in a beach chair and read, write, and listen to music. In the evening, Therese and I went dancing and playing games at the arcade.

On the morning of the second day, I tried to interest Therese in going to Colonial Williamsburg or Busch Gardens amusement park. “No, Dad, I want to stay here at the water park,” she said. On the third day, I tried again, and Therese gave me the same answer. Each time I had a wonderful day with Therese at the water park and nighttime dancing and arcading at the hotel.

Then I started asking myself, “Why am I pushing to go out to these other places when we are having so much fun here?” An old memory came to me – way back when my then-girlfriend won a scholarship to get her Ph.D. at Princeton University. We visited Princeton, where she went in for a meeting with several key professors. I was told the session would last for roughly two hours. I had never been to Princeton before, and I proceeded to try and see all of Princeton – every quad – in two hours.

At the end of these two hours of nonstop fast walking, I felt exhausted. I also thought that I had pushed so hard that, in a way, I had seen nothing – I had experienced nothing. I thought, “It would have been better if I had only seen Princeton’s Old Nassau Hall and maybe one or two quads – and seen them well. I would have had more of a Princeton experience if I had not tried to cram it all in within two hours.” 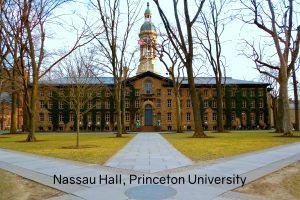 Then I thought, “I had my Colonial Williamsburg experiences when I was in my teens – twice the age of Therese. There will be other trips to see Colonial Williamsburg and Busch Gardens. Better to see and experience one thing now and experience it well. And that one thing is Therese as a six-year-old – because she will not be six years old forever. See this through her eyes, enjoy, and count your blessings!”

And so I did, and I started to really enjoy it! I got the feeling that less compulsive Doing and more real Being was just what the doctor ordered. Less multitasking and less “trying to see all of Princeton in two hours” makes so much sense, and it is what I crave.

I know I have repeated this before, but I think this saying hits the spot – We cannot fail to be in Heaven. We can only fail to recognize it!