Since Roanoke is known by so many as the “Star City,” I thought it might be nice to write about several Star of Bethlehem stories this Christmas.

However, several “starless” Christmas stories really moved me this year. I think there is so much that we can learn from these true stories, particularly since so many of us have numerous stars in our lives.

The first story involves a young man named David Mark Smith, Jr. from Sparta, Georgia. A few Christmases back, David lived in a two-person shelter on a U.S. Army base in Baghdad.

The nickname for this army outpost was Mortarville. It seemed that almost every day, the soldiers had to scramble to avoid incoming missiles from the insurgents. Several times David was very fortunate to avoid serious injuries. The base had a series of sandbags and fox holes to protect our troops from the incoming mortars. 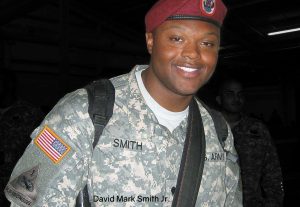 David’s job was to repair tanks, troop transports, and patrol vehicles that got hit by enemy fire. He was very good at the job, but the repeated aerial attacks were taking a toll on his well-being.

He wanted a Christmas tree in his spartan accommodations to remind him of Christmas back home in Sparta, Georgia. His mother sent him a 2 foot tall Christmas tree and mini ornaments, which included a little tractor (similar to the one his father rode on their farm), a little football, and a small race car (like the one he hoped to own after the army).

David was grateful for this little tree and ornaments he set up near his bed. But he missed not having a star to put on top of this artificial evergreen. 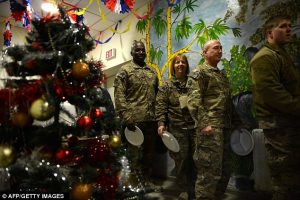 On Christmas Day he went to the recreation tent and found it strung with Christmas lights. There was singing and great joy. Soldiers shared baked goods and other things with each other which had been sent from their families and friends back home. A good time was had by all. They loved singing Christmas carols and then doing karaoke to the latest hits – and some oldies.

The line was long in front of the telephones connected to US area codes. Finally, David got a chance to call home. He was able to speak with his mother, father, and two brothers, not to mention the aunts and uncles who were there. All were able to tell him Merry Christmas and happy new year, and they loved him, missed him, be safe, and God bless you!

After the phone call, David headed back to his little shelter on the base. Just then the air raid sirens sounded. Incoming mortars! He was able to take cover behind some sandbags. After several explosions on the base, the sirens finally sounded all clear. 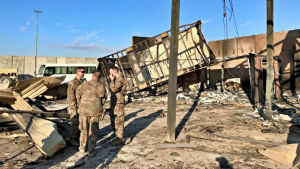 When David got back to his two-person shelter, he discovered that one of the mortars had landed close to his living quarters. Once inside, David found that his Christmas tree and other things had been knocked over.

He picked up his tree and reset the ornaments – nothing was broken!

Then David started to pray a real Christmas prayer of thanksgiving. He thanked Spirit that he was alive, that his family was safe and sound in Sparta, Georgia, that he had such a loving family, and that he had a faith that was seeing him through some rough times.

David thought that it didn’t matter he was “starless” in Mortarville!
Here is a second “starless“ Christmas story. It is about Sheryl St. Aubin in Hudson, Florida. Sheryl and her husband had two children, and every Christmas, they would set up and decorate the Christmas tree a week or so before Christmas. Then they would wait to put the star on top of the tree on Christmas Eve.

The family tradition was to rotate which child would put the star on top. Sheryl’s husband would lift the lucky child high in the air with the star. Then they would lower the star on the top of the tree.

Soon the St. Aubin family was blessed with a third child, and his name was Finn. But there was something very different about Finn. After seeing many specialists, the doctors said that Finn had autism.

One Christmas, it was Finn’s turn to put the star on the tree. The parents tried to pick him up with the star, but he had a significant fear attack and refused.

Sheryl decided not to put a star on the tree that year. One of the older kids bellowed, “Finn ruins everything!” Sheryl lovingly explained why it was more important to show patience and go without a star on top of the Christmas tree.

The family Christmas tree went starless for several years, with Finn refusing to take his turn. The family learned not to pressure or shame him into doing anything.

Then three Christmases later, grandma came over for a pre-Christmas visit. All by himself, Finn went to his mother and pointed to the top of the starless tree. 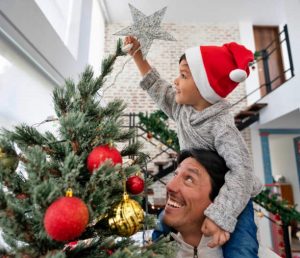 “The Star?” Sheryl asked. Finn nodded yes. So Finn took the star and was lifted up high. Then he placed the star on the very top of the Christmas tree.

Yes, these are two very different stories, but I think they have a common reminder for us. Our game plan often includes a metaphysical Christmas tree – as it were – with a beautiful star on top and a loving family around it – all doing what we think is best (and, of course, we know what is best).

However, reality often has a way of throwing a monkey wrench into our plans, let alone an incoming mortar or autism. But when we can center in on the real reason for this season and count our many blessings, then we can truly enjoy Christmas – even if it might seem to be minus a star or two.

May we remember that the real star is already inside us and just waiting to shine!