The Mad Hatter’s Party: Welcome to the Club!

I am looking forward to the Mad Hatter’s Dinner & Dance coming up on Friday, March 18th at Unity of Roanoke Valley.

It sounds like an enjoyable evening with great fellowship, food, dancing, games, and crazy hats. My crazy hat is ready, and my daughter Rachel and I have bought our tickets. So bring on the Mad Hatter, the March Hare, the Dormouse, and Alice in Wonderland! If you have not purchased your tickets to the dinner & dance yet, please do so this Sunday after the 11:00 am service.

While I was dreaming about all of the above, I started to get curious about Lewis Carroll’s affinity with the Mad Hatter. How did such a character drift into his mind? After all, the Mad Hatter is in Alice in Wonderland and Through The Looking Glass. 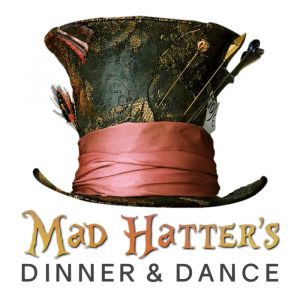 Lewis Carroll, of course, is the nom de plume of Charles Lutwidge Dodgson, who was an Oxford University mathematician during the Victorian era. Queen Victoria was thoroughly delighted when she read Alice in Wonderland. She asked that Lewis’ next book be sent to her. The Queen was more than taken aback when his book turned out to be a tome on mathematical proofs.

Some accounts say that Lewis lived near a hat factory as a boy. Hat making was the major trade in the British town where he grew up.

Back then, mercury was used in the manufacturing of felt hats. Mercury poisoning can cause neurological damage, including slurred speech, memory loss, and tremors. Of course, Lewis’ childhood was well before the creation of the Occupational Safety & Health Administration – not that America’s OSHA would ever cover the subjects of Her Majesty the Queen.

So many hat workers suffered from the effects of mercury poisoning that it was a common turn of phrase to say, “Mad as a hatter.” Even if Lewis did not live near a hat factory, we have evidence he read several novels that had characters in them poisoned by mercury.

Interestingly, the Cheshire Cat – who is not all there – first says that the Hatter and the Hare are “both mad.” There are claims that the Mad Hatter was inspired by Theophilus Carter, who was a very eccentric furniture dealer in Oxford in Lewis’ time. 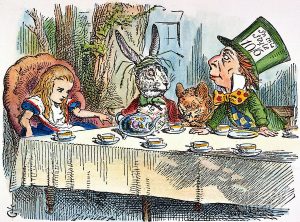 As I was thinking about the Mad Hatter’s Dinner & Dance, something else really caught my attention. The Unity of Roanoke Valley Book Club just started reading a new book by Eckhart Tolle, A New Earth: Awakening to Your Life’s Purpose.

In the first chapter, Tolle points out that almost all of the world’s great ancient religious and spiritual traditions point to two underlying truths. Yes, they present these two truths differently, saying them with different words. But they all essentially point to the same fundamental truths.

The first truth is “the realization that the “normal” state of mind of most human beings contains a strong element of what we might call dysfunction or even madness,” Tolle says. The human mind is a wonderful thing. However, “its very intelligence is tainted by madness,” he adds. Given recent events about war and environmental destruction, Tolle’s observation seems even truer now than when he first wrote it down a few years back. 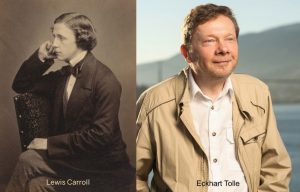 In his great novel, Ulysses, author James Joyce has one central character (Stephen Daedalus) say, “History is a nightmare from which I’m trying to awaken.” To this, Tolle comments, the “collective manifestations of the insanity that lies at the heart of the human condition constitute the greater part of human history. It is to a large extent a history of madness.” And he asserts that “this dysfunction is actually intensifying and accelerating.“

Tolle believes that fear, greed, and the desire for power are the motivating forces behind warfare and conflicts between tribes, religions, and nation-states and are so often the source of misery on the personal level. The sad thing is that this madness often appears to be the default position or modus operandi for many of us. 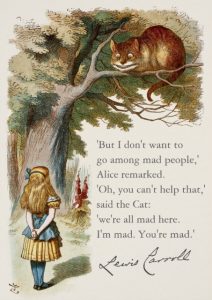 Fortunately, Tolle believes that the ancient spiritual traditions also pointed to a second great truth: There is a way out of this madness!” They (these spiritual traditions) then pointed to the possibility of awakening from the collective nightmare of ‘normal’ human existence. They showed the way,” he writes.

It is not too late to join the URV Book Club in studying A New Earth: Awakening to Your Life’s Purpose to find ways out of the madness. Please send an email to hp4360@gmail.com and put NEW EARTH in the subject line if you are interested.

I am going to enjoy the Mad Hatters Dinner & Dance. I also feel very grateful to be studying Tolle’s suggestions of how we can climb out of the madness and into the sunlight of the Spirit.