The QUEEN’S GAMBIT: Check, Your Move. 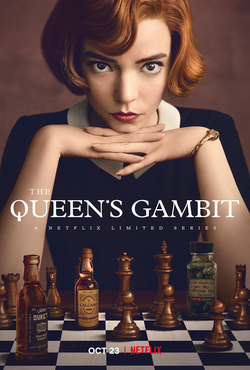 My daughter Rachel and I finished watching The Queen’s Gambit which is an excellent miniseries on Netflix. Both of us were really drawn into it.

The story is about a young woman, Beth, who is an orphan raised in an austere orphanage in Kentucky during the late 1950s and early 1960s. The historical details are impeccable. While there she discovers the institution’s janitor in the basement, and that he is a devoted chess player. She learns the basics of the game from him, and he realizes that she has the makings of a chess grandmaster.

Part of the orphanage’s routine is to sedate/drug the girls. Beth develops an addiction to the “green ones.” Under the influence of the “green ones” Beth can see chess boards and pieces on the ceiling moving in fantastic patterns that reveal groundbreaking chess moves to her.

Beth is eventually adopted by a highly dysfunctional couple, which includes a “daddy” who is almost always on the road and a “mommy” who has serious problems with alcohol. “Daddy” is soon out of the picture, and “mommy” just loves the money and trips associated with Beth’s assorted chess tournament victories.

The scene that moved Rachel and me the most was when Beth was in her Moscow hotel room facing her demons. Beth finds the courage to dump the “green ones” down the toilet. And here is the wonderful part: Beth discovers that she can still see the chess board and chess pieces “moving on the ceiling” without pills or alcohol.

That is the beauty of it. Let me use my images and belief system for a moment: We don’t need pills, alcohol, trips to the Himalayas, the ability to read ancient Sanskrit texts, compulsive sex and spending, the corner office, the degree, or ____________ (you fill in the blank), to see the chess pieces “moving on the ceiling.” Contact with Divine Mind, or discovering the power within (to borrow from that great Unity teacher, Eric Butterworth), is already our birthright. When we are spiritually centered, “all things are possible” (to quote from The Good Book).

My thing is not chess. I like the game and play it, but I do not have the desire – or talent – to become a grandmaster. The same with baseball for me. I love the game, and I think I am still a good first baseman. But I am not about to make it into the Hall of Fame in Cooperstown, N.Y.

Nevertheless, all of us have talents, and as Jesus pointed out we are all to make the most of our talents. We can do that and see the chess pieces “moving on the ceiling.”

Now let me restate the above using the language of many of my atheist and agnostic friends: We are like V-8 engines, but on most days we are only operating on 3 or 4 cylinders. There are times – Peak Experiences – where we are “cooking with gas” and functioning on all eight cylinders. There are even times when we seem to be going on ten cylinders. Where those extra two cylinders came from, nobody knows. We do not need drugs, alcohol, and all of the other possible addictions to accomplish this.

Rachel and I are delighted to see that there will be a second season of The Queen’s Gambit. Until then, May the chess pieces “move on the ceiling” for you.