The Rise and Fall of Tammy Faye Bakker

Several years ago, while giving a Sunday message, I could feel a wave of tears about to flow from my eyes.

Feeling embarrassed, I looked at the congregation and said, “I feel like Tammy Faye Bakker because my mascara is about to run.” The congregation responded with laughter, and that gave me enough time to recover emotionally.

The Eyes of Tammy Faye is a new movie about the life and times of Jim and Tammy Faye Bakker. The movie brought back memories of these two televangelists and their PTL (Praise The Lord) Satellite Network. Each PTL show was a glitzy production of Hollywood-type talent, upbeat “God loves you … He really does love you” messages, prosperity consciousness, and pitches about sending PTL money. Added to this mix were Tammy’s evangelical singing and highly emotional soliloquies. At the height of the PTL’s appeal and reach, Tammy’s singing and monologues were seen worldwide by roughly 20 million people per day. 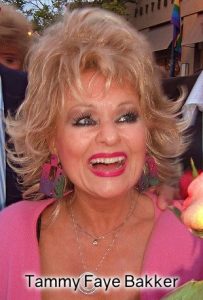 The film shows Tammy’s childhood in rural Minnesota. Her parents were Pentecostal preachers, and she was raised in a very strict and austere family environment. She developed a deep faith and was “speaking in tongues” before middle school (a key sign in a Pentecostal church that one has been “baptized by the Holy Spirit”). Tammy went to a Bible college in Minnesota, where she met Jim Bakker.

Both of them were rebels in Bible college. Jim advanced ideas of God wanting us to be rich and happy, while Tammy saw nothing wrong with wearing makeup and fancy clothing. She was also against telling people that if they didn’t abide by, shall we say, “the party line” they would go to hell. Needless to say, they left this Bible college before graduating.

Jim and Tammy were married in 1961, and they became traveling evangelists. They developed a collection of puppets that they used to minister to children. One thing led to another, and the next thing you know, Jim, Tammy, and their puppets were stars on a widely watched children’s show on Pat Robertson’s Christian Broadcasting Network (CBN), from studios in Virginia. It was only a matter of time before the Bakkers started hosting a popular show for adults on CBN. 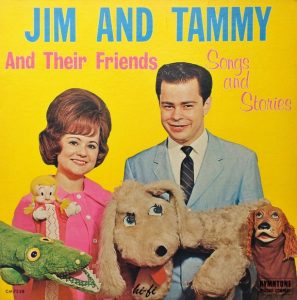 Ever the entrepreneurs, the Bakkers felt they could do much better if they built their own network. So they moved to Charlotte, North Carolina, and founded what became the PTL Satellite Network. They were pioneers in religious broadcasting, using advanced technology to get their programs beamed worldwide and into millions of homes.

Within a year of PTL’s founding in 1974, the enterprise was generating over $120 million annual revenues. As the income flowing into PTL skyrocketed, so did some unhealthy patterns. The Bakker’s lifestyle and consumption patterns went over the moon – and Saturn and Jupiter! Trouble started developing in their marriage, and they both wound up in extramarital affairs. Tammy began popping pills like they were Skittles.

The Bakker’s plans for PTL became infected with a hefty dose of megalomania and unreality. No matter how much money PTL received, its debt levels grew by leaps and bounds. PTL started to resemble a giant Ponzi scheme where more and more money had to come in to cover more and more debt. No such Ponzi scheme can last forever. The media started reporting the lavish lifestyle of the Bakkers and the poor financial practices at PTL.

The straw that broke the camel’s back happened when news broke that PTL had paid $265,000 in hush money to a woman that Jim Bakker had allegedly raped. Baptist minister, and leader of the so-called Moral Majority, Jerry Falwell, was called in to take over the PTL ministry and the resort and amusement park the Bakkers had built. Even though the Bakkers were removed, Falwell could not keep the kit and caboodle out of bankruptcy and closure.

Jim Bakker was, of course, tried and convicted on multiple charges of fraud, and he served time in prison. Tammy Faye went through a great fall, too – although she was never arrested, charged, convicted, or went to prison. She died in 2007 of cancer. 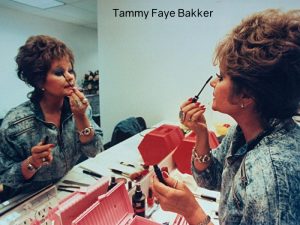 The new movie does an excellent job of depicting the temptations that can arise when we are not spiritually centered. Jesus was able to face these temptations in the desert and pass the tests with flying colors. Many of us do not come away from these difficulties with such high marks. Also, we may never experience the temptations or opportunities that the Bakkers faced. But I think the film shows: 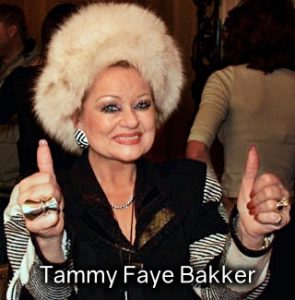 The film shows Tammy Faye – who was rarely back on camera for many years after her PTL downfall – performing. Oral Roberts University (ORU) invited her to sing at an event in the film’s closing scene. It was interesting for me to see the shots made in Tulsa, Oklahoma, at ORU. Before Tammy sings, she quotes from Psalm 91, which also played a big part in Myrtle Fillmore and Unity pioneer Emilie Cady’s lives.

Psalm 91 talks about “The secret place of the most high.” When we are in that secret place, we can be in “the shelter of God’s wings.” We can feel safe and protected. The temptations to jump the rails, etc., are much less. And if they come, we seem to have the power and wisdom to keep doing the next right thing.

If you get the opportunity, I suggest you see The Eyes of Tammy Faye. It is good to be reminded that “all that glitters is not gold.”