Uploading Your Consciousness: Or Is It Already Uploaded?

Welcome to the future!

We can now do many things that were only science fiction back in the olden days (say back in 2022). For example, now, when you die, we can upload every little last bit of your consciousness into supercomputer networks in the cloud.

Of course, uploading your consciousness is a costly proposition, and you have to have a lot of money to do this. Most people can’t afford to upload anything when they die. Even if you are fortunate enough to upload your consciousness, there is the question of which “computer heaven” you will be uploaded to. 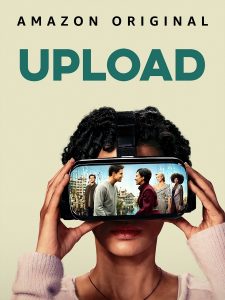 These “computer heavens” are like resorts, and some of these heavens are more exclusive than others. I mean, you wouldn’t want to spend eternity in a cheap resort with the wrong sort of people – now would you?

The above is the general premise and set up for an interesting show you can stream on Amazon Prime Video. The show is called Upload, and it is the brainchild of Emmy award-winning producer Greg Daniels. He was the force behind such shows as The Office and Parks & Recreation. In essence, the key proposition presented in Upload is this: If you have the money and the right earthly connections, you can pick your afterlife experience.

The show centers on Nathan Brown, who is a 27-year-old computer programmer. Nathan thinks it is wrong that two or three tech company behemoths have total control of the “computer afterlife market.” He is writing a program that he intends to provide as “open to all” software, making uploading consciousness available to almost everybody.

Nathan’s girlfriend, Ingrid Kannerman, was born into wealth, and she has other dreams for Nathan. Alas, Nathan won’t follow Ingrid’s script. Then one night, Nathan gets into his computer-driven sports car, which starts misbehaving. In the end, his self-driving car crashes, and the impact kills Nathan.

Ingrid has Nathan’s consciousness uploaded to Lake View, which is probably the most exclusive afterlife resort that exists. At Lake View, Nathan meets the consciousness of one of the wealthiest entrepreneurs that ever lived. This former mogul tells Nathan that the car crash was probably not an accident. If Nathan had successfully released his program, it would’ve cost the tech giants billions of dollars. No, says the mogul. That was not an accident. You were murdered! 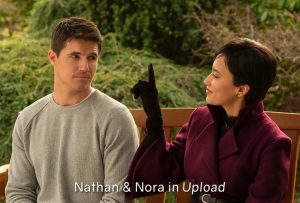 But that’s not all that is going on for Nathan in the afterlife computer resort. You see, Lake View is so posh that each guest has a concierge/customer service representative/handler. This “friend” is a living, flesh-and-blood person behind a computer screen with headphones on. In Nathan’s case, his handler is a young woman by the name of Nora. Naturally, this customer service/handler relationship soon develops into a real friendship, which of course, develops into a love relationship.

A love relationship between a living handler and a dead resident at Lake View is strictly forbidden by the tech company’s code of something. But … there is always illicit uploading. As Shakespeare put it, “The course of true love never did run smooth on the Internet.” 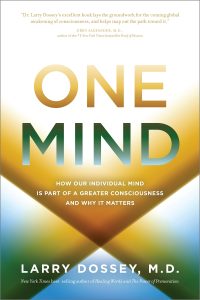 The entire issue concerning the future of uploading a person’s consciousness is fascinating. I have been reading two books that interestingly raise the possibility that uploading and downloading consciousness is already happening. These books more than suggest that uploading and downloading are an integral part of this universe – and all of the other universes that exist. Before you dismiss all of this, I ask you to read on.

Dr. Dossey believes this reality helps explain near-death experiences, epiphanies, premonitions, non-local experiences such as healing at a distance, and more. He presents a ton of evidence from a wide range of fields to support this One Mind hypothesis. Dr. Dossey also points out that mystics and spiritual sages have pointed to a One Mind experience down through the ages. 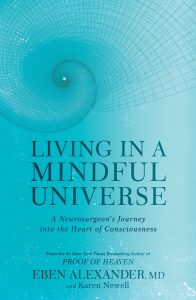 Dr. Dossey says that if it is true that there is no spot where God is not, then this universe (which he believes is part of a far larger metaverse) is like a hologram. The complete image is in every part of a hologram. For Dr. Dossey, it is not a question of uploading or downloading anything since everything is already at any spot you could pick.

For students of Unity, this is not an unimaginable jump. We speak of Divine Mind, and a key goal is to align our consciousness with Divine Mind. Unity pioneers pointed to consciousness as existing beyond the individual physical skull. We often don’t call it death – we call it a “transition.” I loved how Dr. Dossey brings out the implications for our daily living in the material world in light of the One Mind hypothesis.

The second book is Living in a Mindful Universe: A Neurosurgeon’s Journey into the Heart of Consciousness, by Dr. Eben Alexander. As a Harvard University professor and a leading neurosurgeon, Dr. Alexander says that the last thing in the world he was expecting to have was a near-death experience. But that is exactly what happened to him, and it was highly documented. This incident led Dr. Alexander to explore the nature of consciousness, and it also led him to reach many very similar conclusions as Dr. Dossey. 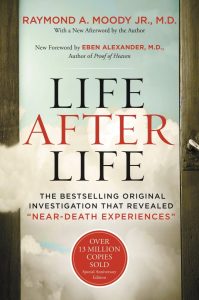 Both doctors do not think the evidence supports a materialist hypothesis of consciousness. They believe that it doesn’t boil down to a few chemicals and neurons flashing. There also seems to be some uploading and downloading between our brains and something beyond – call it One Mind, Cosmic Consciousness, God … you fill in the ___________. Also, both doctors do not believe that the Mind is just the wet matter inside our skulls. Mind does not equal Brain. Both doctors see this metaverse as being like a hologram with the entire “image” – or consciousness – at every point.

I more than recommend both the Dossey and Alexander books. I would also recommend a classic in the field: Life After Life, by Dr. Raymond Moody, Jr. And, if you can, why not stream a few episodes of Upload?

Let me give the last word to Saint Francis: “And it is by dying that we are born to eternal life.”